The Ups and Downs of Sailing 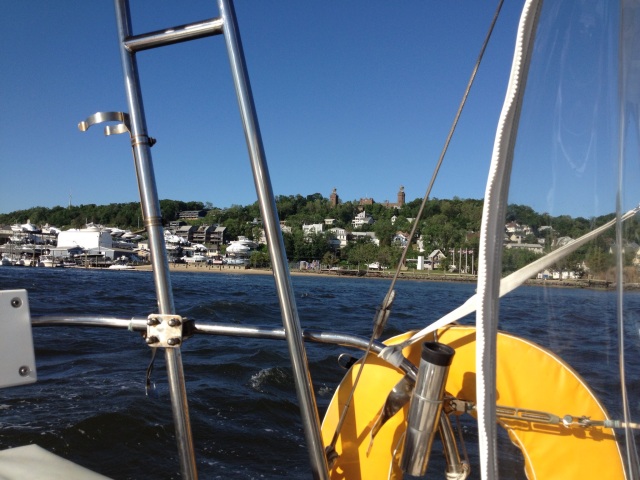 Tuesday broke bright and sunny and we motored out of Sandy Hook at about 8:00am after refueling at the marina dock.

When I went to pick up the fuel bill, I noticed that I was missing my charge card. A disaster when you are on the move. I searched all my belongings and had Doug double check. No card. I had last seen it on the table at the Chart House restaurant at the Golden Nugget in Atlantic City on Sunday evening. Crap. Atlantic City can’t be a good place to lose a credit card.

I called the restaurant several times during the morning as we worked our way to Verrazano Narrows but I kept getting the night line. And the night line gave no indication as to when a human would be available. I was ready to call and cancel the card, with all the ancillary crap that would inevitably entail.

Finally, around 11:30, someone answered the phone. It was Anthony, our waiter, and he said he found the card on the table and gave it to “security”. Bless you, Saint Anthony.

My third call attempt finally reached security and then someone told me that yes, they had the card.

“Can you mail it to my house?”

“Sure, but we need a credit card to pay UPS.”

“But you have my card in your hand.”

“I can’t use that one. We need another one. It’s the rules.”

Didn’t I read this once in “Catch 22”? But I sighed and gave them Doug’s card. They’ll ship it tomorrow. Disaster averted.

Or semi-averted, as now I’m still afloat without a credit card. Or an ATM.

That can be filed under “first world problems”, I guess.

So back to the cruise. We left our intrepid sailors as they motored under the Verrazano Narrows bridge and entered New York harbor.

Doug and I moved to the bow where we could lean against the forward cabin, absorb some sun and watch the world go by. 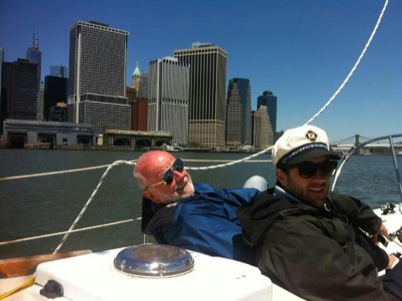 I guess I absorbed a lot of sun. 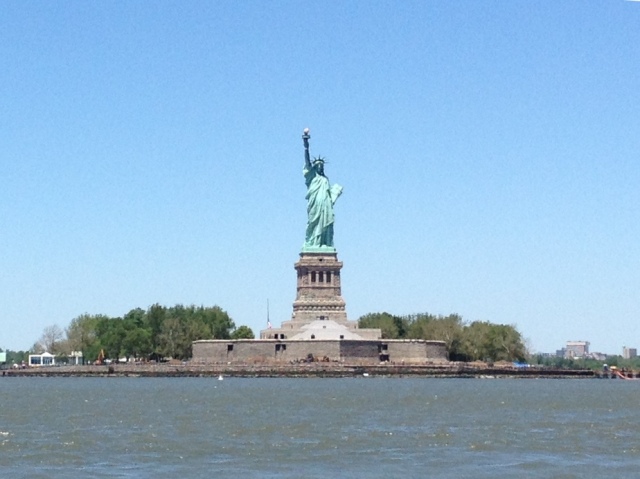 First stop, the Statue of Liberty. Steve steered as close to the lamp lady as possible with the tourist traffic and the ferries. A beautiful view.

Next was the Battery, with the nearly completed Freedom Tower soaring above the always impressive skyline. 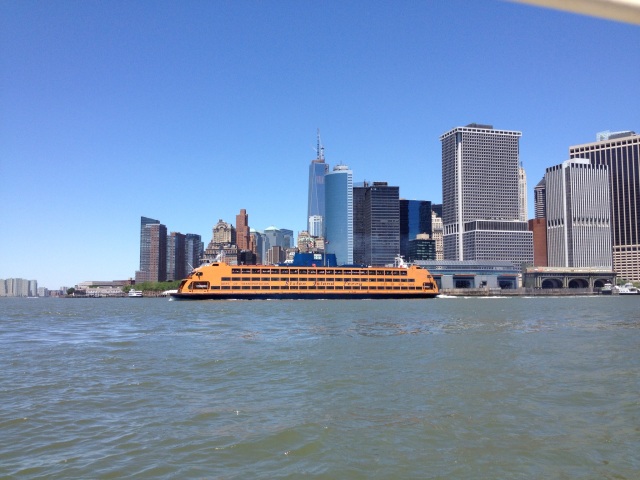 We then crossed toward the East River entrance and began maneuvering to avoid the congestion always found in front of the Staten Island Ferry terminal.

Doug and I were riding along on the bow, watching the ferries, water taxis and barges scurry about when suddenly the bow lurched about 120 degrees to port. “What the…” We turned to the cockpit and saw Rick waving the tiller bar, which had snapped off the rudder post. We had zero steering ability as the remaining stub of the tiller was now little more than a fist sized knob.

Steve quickly dropped the diesel to minimum RPMs and sprinted below deck to dig out the replacement. We sort of puttered about in a circular little space, fortunately empty of traffic, as he bolted the new tiller into position. Within about five minutes of the mishap, we were motoring at full speed past the ferry terminals and up the East River toward the Brooklyn Bridge.

Doug and I returned to the bow and discussed how lucky we were that the tiller broke then and not 15 minutes later in the traffic at the East River entrance. 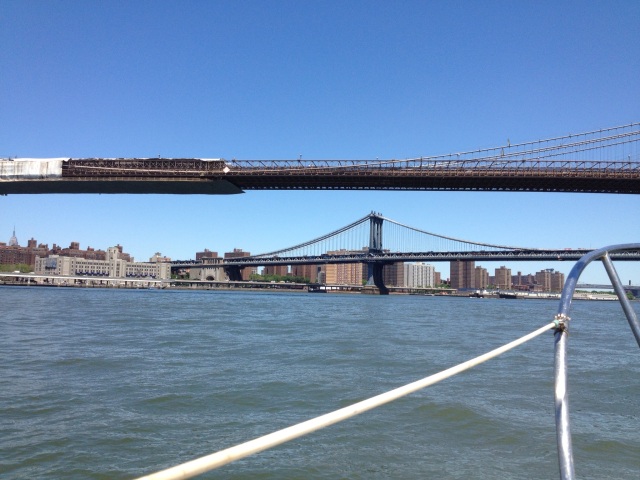 The Brooklyn and Manhattan Bridges.

Our course led up the East River and then we hung a right (Steve refers to this as “starboard”.) by Rikers Island and then through Hell Gate. This ominously named passage to Long Island Sound has a reputation for tricky tides and currents, especially for first time visitors. We made it through without a hitch, passed the always impressive Rikers Island and then under the Whitestone and Throgs Neck bridges. Long Island Sound was just ahead.

After some of the rough water we’ve seen, the feared Hell Gate was relatively calm, which Steve attributed to the slack tide. The sun was out, the breeze was behind us and the water ahead unobstructed when we decided conditions were finally right to sail.

Doug and I had kidded Steve that the “sail” part of his sailboat was still just a rumor to us, so everyone was eager to unfurl the jib and take a break from the throbbing of the diesel.

And it was just as nice as we hoped as we bobbed quietly along, listening to the waves lap against the boat.

But a speed of less than 3 knots doesn’t cut it when most of the crew has to work Monday, so to stay on schedule, we had to put up the main sail.

First Rick and Doug, and then even I, moved up top to wrestle with the lines and the canvas, trying to get the main set. Steve finally had to leave the tiller and climb up from the cockpit to smooth the sail into place and get everything tied down correctly.

Once both sails were correctly set, everyone returned to their comfortable positions as the Skookum Lady silently cruised along in the breeze. Again, it was really nice.

But just a few minutes later, we hear Doug shout from the bow “Starboard! Now! Starboard!”

In seconds, almost before Rick could throw the helm over, we all felt a solid thump and the boat lurched to a stop. We hadn’t really gotten up to more than 3 or 4 knots, so the collision wasn’t very violent, but there was no mistaking it, even the landlubbers among us (me) knew we were stuck.

Evidently, as everyone on board was working on getting the sails up, just those five minutes of neglecting the charts got us off course and into (in our defense, a poorly marked) field of scattered rocks just beyond Throgs Neck..

The tide was now dead low. This meant two things: first, if the damn water was just a bit higher we would still be sailing. Second, the tide was soon going to rise and we eventually would be floated off.

We quickly furled the sails and took stock of our position. After some futile back and forth with the diesel, Steve decided to call TowUS, the AAA of the sea, with whom any smart recreational boater maintains a yearly membership with unlimited towing. Because that’s what boats are like, I guess.

Two helpful men in a nifty little red shallow-draft towboat with two 150 hp outboards quickly showed up. They assessed our predicament and tied on to the bow. After some preliminary tugging, there was a bit of discussion, and then it was decided to pull gently at the bow until the rising tide floated us loose.

They told us that we were “lucky” to have made it almost to the end of the rocky area, only striking what appeared to be the last rock. Oh, lucky us. They were friendly and professional and talked with Steve about places to stop on our route as we all waited for the tide to do its work. A half hour later, we were free and they guided us outside the danger area.

They lifted the floorboards to check out the keel bolts and told us that there seemed to be no damage. Steve completed the forms and we headed across the Sound to pick up a mooring ball at a marina they recommended on City Island, off the Bronx. Enough with the adventure for one day.

We went to Sammy’s Shrimp Box, possibly America’s most over priced restaurant, where the food was mediocre but the boat drinks were terrific. I recommend the Ice Cream Pina Colada. We just ate a bunch of appetizers, finished our drinks and caught the launch back to the Skookum Lady.

Captain Steve and Lady Beth at the Marina on City Island.

Beth taking one last photo before turning in.