Running from the Storm

We awoke at the marina on City Island and were underway by about 8am. The sky was immaculately clear and the sea was very manageable. The brisk wind was, as always, in our faces so it made sailing impossible. Once more, the Little Diesel That Could was noisily carrying us along.

This was Wednesday morning, and we were technically still in NYC. At 6 or 7 knots, we will take two days to cruise the length of Long Island Sound and reach the approaches to the Cape Cod Canal Thursday night. This will allow us to go through the canal and make port on the South Shore somewhere Friday, leaving Saturday and Sunday for Steve to reach Newburyport. It will be tight as everyone but me has to work on Monday. If the seas act up and we can only make 5 knots or less, we (they) may be in a bit of a jam.

But the sun was bright and the sea pretty calm and we were all very upbeat as we puttered eastward along the Sound. 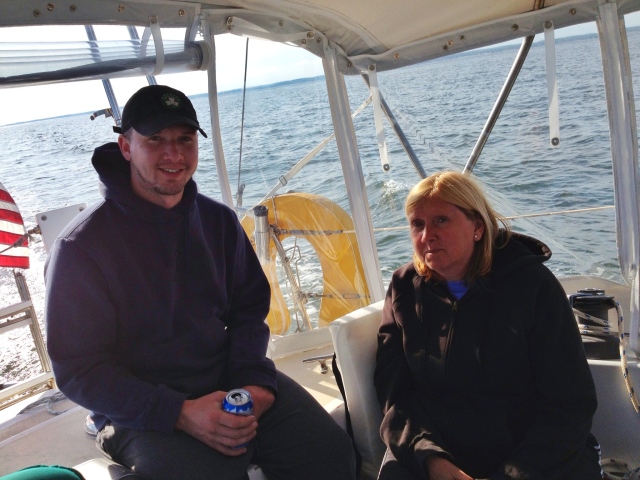 Rick Kelly and his mom Beth in the cockpit.

Rick was Steve’s right hand on the boat. He did much of the actual work of sailing at Steve’s direction and eagerly absorbed all the navigation and sailing wisdom Steve could impart. Beth made sure we were all fed and cared for. There were five people living in this floating phone booth for a whole week and it was great fun. Much of that is attributable to Doug and I being able to cast our lot with such genuinely nice folks.

The seas were flat. If only the wind would shift just a little bit.

Passing boat mocks us with its fancy spinaker as we plow straight into the wind.

Finally the wind cooperated and we were able to sail for quite a while. With the diesel shut off and the sails unfurled, the world looked pretty sweet. 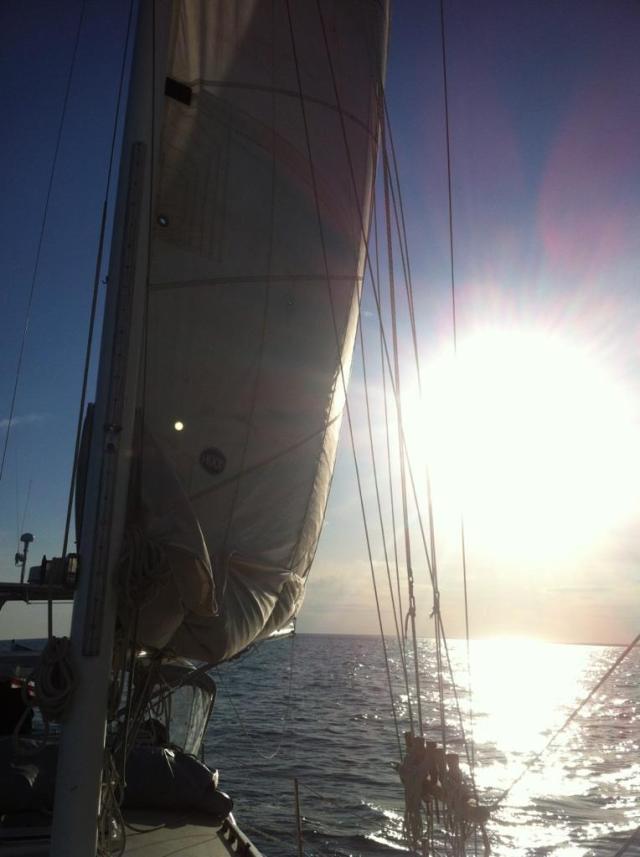 Rick took a beautiful shot as we cruised east.

The sight of a rainbow made me think of Betty, a lifelong rainbow fan.

Then the USCG started talking about tropical storm Andrea racing up the coast to intercept us with high winds, 9 foot seas and up to 4 inches of rain.

Oh goody. We went to diesel mode and decided to make it as far to the east as possible today. Steve found a marina in Noank, CT. They would be closed when we arrived, but directed us to tie up at either extreme of their 400′ fuel dock. Sounded easy enough.

When we arrived Wednesday night, it was pitch black and we had to use flashlights to pick out the channel buoys as we spent about 20 harrowing minutes creeping through a fleet of boats at about half a knot until we finally identified, and tied up to, the elusive fuel dock.

Rick and Doug set off into the surrounding darkness to find a sports bar to watch the Bruins but returned in 10 minutes. Nothing on this deserted peninsula except the marina, now closed and dark. Doug jury rigged some sort of hotspot with his cellphone and we got to watch the last period and the overtimes on his Macbook.

We got a text from Verizon the next day saying we had ripped through 50% of the family’s shared data allotment with three weeks left in the month, but it was worth it as the B’s went up 3-0 for the series by beating the Pens in the second overtime. Totally, totally worth the bandwidth.

We awoke the Thursday morning, showered the crew, fueled the boat and set out about 9am. As we were now in a race with the storm, Steve was determined to make the entrance to the canal by nightfall to await the favorable tide needed for the passage through to the bay.

Eventually, it was decided that we would anchor off of Marion, MA, just outside the canal breakwater, and start through when the tide flooded around 2:30am Friday morning.

We arrived at the breakwater about 10pm and found a suitable anchorage out of the channel. Rick dropped the hook and we all went below and tried to grab some sleep.

Everyone was up and at ’em by 2:30am. Well, everyone was “not asleep” anyway as we winched up the anchor and dieseled into the channel to make our way to the canal proper. It took about an hour in the approach just to get to the actual cut.

Steve had timed it just right and the tide assisted diesel had us way up around 8 knots as we chugged along. The bike paths along both sides of the embankment have street lights installed for the whole length of the canal, so navigating the actual waterway was pretty easy. We saw about 40 people fishing in the dark along both sides of the canal at 3:30am on a Friday morning. People must love to fish.

We passed the railroad bridge, the Bourne Bridge and finally, just as the sun was rising, the Sagamore. We were feeling pretty good about ourselves as we steamed out into Cape Cod Bay.

There we were immediately met with high seas, strong opposing winds and fog banks bringing visibility down to a couple hundred yards at times. Our delightful procession up the South Shore was not to be.

The previous evening Steve had asked me to call some Marshfield area marinas to see if there was a slip available, We had a couple of turndowns and a recommendation of Taylor Marine in Green Harbor.

Marina: "Well, I wouldn’t come in at dead low, but you should be OK."

We motored north through fog and heavy seas for a few more hours until we reached the Green Harbor breakwater. As we passed between those loving arms, the waves abated, the wind dropped off, even the fog seemed to lift.

Betty drove up to the pier for a tour of the boat and to offer food and showers at our house. After standing at the helm for almost 24 straight hours, Steve wanted to nap. Betty drove him, Beth and Rick to Arthur & Pat’s for their gigantic breakfast, and then drove Doug and I to our house.

After extended remedial showers, tooth brushing and eating, I drove Doug to Dorchester and returned to nap in my quiet home, which hasn’t pitched or rolled once since our return.

When everyone was sufficiently napped, Betty drove Beth and Steve and Rick to our house for a great dinner and we all laughed and drank and told tales of our little adventure. After watching the first period of the Bruins’ clincher with the Pens, I then returned the crew to the Skookum Lady, where they had decided to ride out the storm. The custom of the sea, I’m told.

The next morning, Steve set out from Green Harbor, heading due north for Gloucester. The Lady arrived about 8pm Saturday night. They even got a bit of sailing in.

They left Gloucester about 730am Sunday morning and made it home to the Merrimac River in Newburyport in early afternoon. On schedule.

What a week! Spending time with Doug, getting back together with Uncle Steve and Beth and meeting the irrepressible Rick, doing a little sailing, a lot of motoring, seeing Atlantic City for the first (and probably last) time, experiencing minor danger and major fun, it was so very worthwhile.

My thanks to the Skookum Lady and her crew for a solid week of memories.