With Joe at the wheel, we pulled out of Kenora (which will always be Rat Portage to me), leaving this nice little town in our rear view mirror and heading for the Provincial border.

We crossed into Manitoba after about an hour’s drive and stopped at the Visitor’s kiosk on the highway. The nice lady there gave us a bunch of maps and brochures and two pieces of advice.

First, she told us that the Calgary Stampede will end this Sunday, not next, and a flat out dash across the plains (at legal limit +9 mph) would get us to Calgary late Sunday afternoon, so the Stampede will not happen for us.

Second, MOST people avoid the boring, flat-as-a-pooltable TCH and choose to drive a more northernly road, “The Yellowhead Route”, which will take us through Winnipeg, Portage la Prairie and on to Saskatoon. A Yellowhead is evidently some kind of flower and the route is considered the scenic route.

So we worked out a plan. We will follow the Yellowhead to Saskatoon and then to Edmonton. From there, we go south to see Calgary and then west to Banff and Lake Louise, heading due north up the eastern slope of the Rockies into the Yukon. 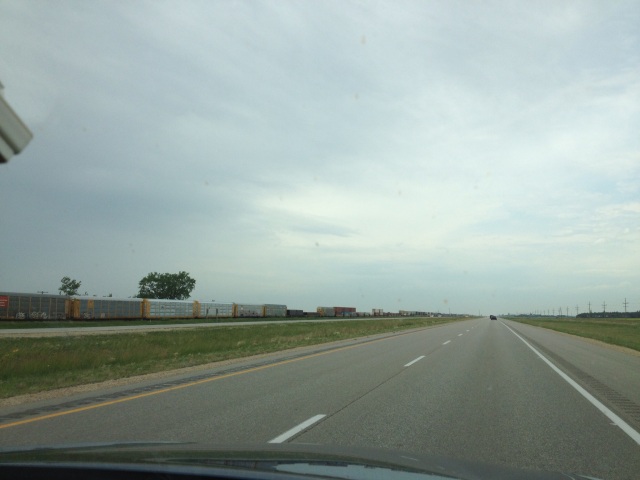 We then left for Winnipeg, following the four lane TCH (route 1 here) until we reached The Forks, the touristy area where two rivers meet at the city edge. Enroute, we saw several extremely long freight trains on the track next to the highway. By “extremely”, I mean three locomotives pulling over 100 cars, usually tankers or containers. Impressive to see two of them pass in opposite directions.

At the Forks, there were several railroad related buildings rehabbed to attract visitors. One, the former passenger terminal, is now Winnipeg Market, filled with colorful stalls and vendors, reminiscent of some European markets I’ve seen.

Winnipeg did a nice job with the Market.

The basement was filled by an enormous antique store featuring books, clothing and all sorts of gadgetry. It was like the world’s best flea market. They let you touch most everything, but forbade picture taking. But trust me, you could spend hours there.

The Forks did seem to be a great place to bring children on a day camp outing. Despite the drizzle, the Forks seemed to be a fun place.

We bought and ate a couple of subs and then left, heading west.

Once you get over the awe-inspiring flatness of the plains, where you can see nothing but square mile after square mile of dark-green and yellow-green knee high plants stretching literally to the horizon, it quickly becomes monotonous. The only break in the landscape are farm related structures, often colorful, about every 5 miles, and small towns every 50 miles or more. We were happy to branch north onto the Yellowhead at Portage la Prairie to what was promised to be hill country.

The terrain did become more varied and interesting although never anything approaching hilly. What the road did become was incredibly straight. We could see the two lanes stretch out before us all the way to the horizon. And it also became much more sparsely populated, with houses few and far between.

So when we saw this decrepit old army surplus store by the roadside, we had to stop.

The yard was littered with military junk like this tank turret with the phony German cross painted on the side.

A line of old Canadian Defense Forces trucks rusting away in a field.

Although it’s hard to see what value is left in these stripped and rusted hulks, they were fun to climb on and photograph while Joe befriended the proprietor.

Pulling back onto the Yellowhead, we decided that we would do our best to reach Russell, MB, about 25 miles from the Saskatchewan border.