Taos – Days 6 & 7 – Hanging Out, Mostly and then the Martinez Hacienda

Day 6, Thursday, we decided to just hang around for a change. After a great breakfast at Michael’s, Betty went to the Plaza to paint a bit and I kicked around the resort and caught up with blogging.

The day ended with a late dinner at the Taos Diner, an inexpensive local joint, where the waiter explained to me that, actually, the green chile was usually hotter than the red chile. A revelation. Assuming the reverse, several times this week I had tasted the green (like fire) and then avoided the red. Red means hot in everything else, right? Well, it turns out the red was too hot for me anyway. No surprise, though, when you consider brown mustard makes my forehead sweat.

Day 7, Friday, we decided after breakfast to visit the “3rd best adobe site in Taos”, the Martinez Hacienda. After several random (and wrong) turns had us driving along barely paved farm roads in the middle of nowhere (ie: anywhere a half mile from Taos), a local woman in a dusty Land Rover took pity on us as we perused one of those “not to scale” placemat maps at the side of the road. (Everyone we have interacted with here has been unfailingly patient and helpful.)

The Martinez Hacienda is an adobe walled compound dating to 1804 that served as the Martinez residence, the local social center and the fortress from which the local Mexicans and Indians withstood frequent Comanche attacks. The Hacienda has 19 rooms of which about 14 are restored and furnished as they would have appeared in the mid-19th century.

The Martinez Hacienda pretty much as the Comanche would see it. The smaller door is a later addition. 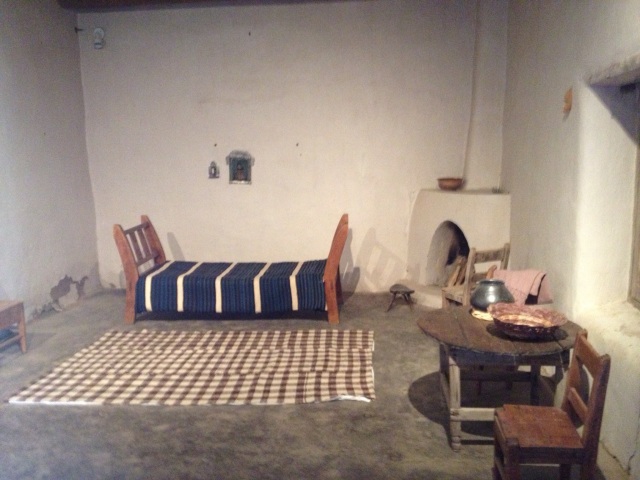 The master bedroom. Furniture was pretty precious in 1804 NM. As in: if you wanted a new table, first find a nice fat straight tree… Anything else had to be hauled overland from Chihuahua, through those same Comanches. 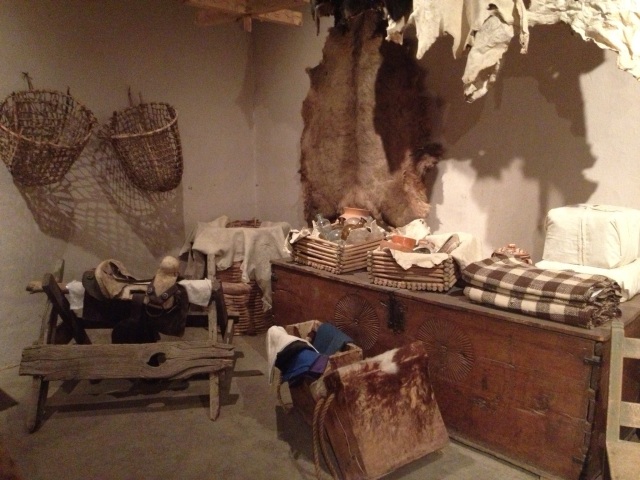 A storeroom of handmade goods. Despite the constant risk of death, the local Mexicans, Indians and eventually American trappers carried on a system of barter and trade that allowed each group to lead a better life. 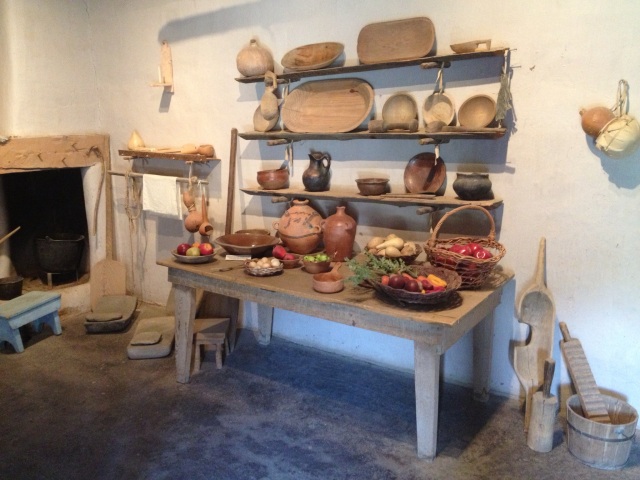 The kitchen. Note the fireplace at the left. One of two in the room.

That same fireplace is on the right here. They would cook in winter by taking coals from the fireplaces and placing them under pots on the lower adobe shelf. Then everyone would sleep on the warm upper shelf while the food simmered all night and the fumes and smoke were drawn under the bunk and up the chimney. Living in an early crock pot. It was that cold outside. 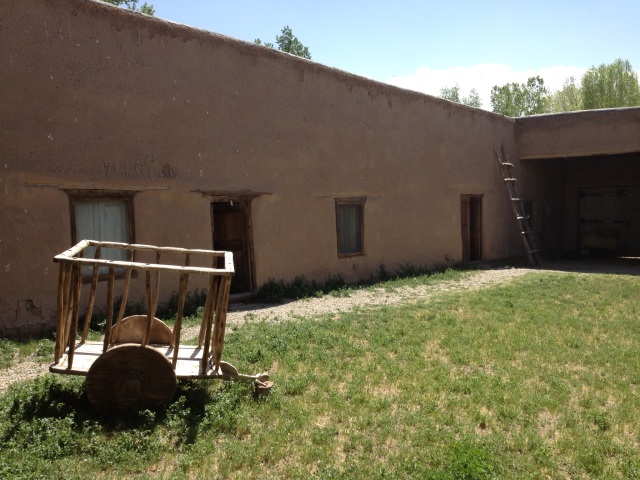 The center courtyard of the fort-like structure. The adobe outer walls are up to two feet thick. 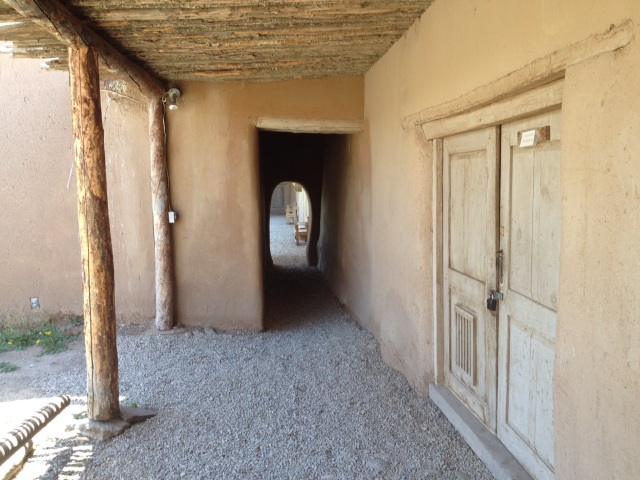 Passage to second courtyard off which the help would have their quarters. 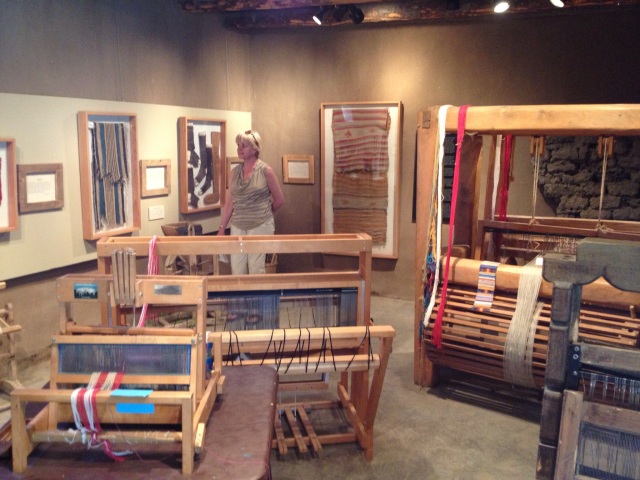 A weaving room full of relatively modern looms used for classes and demonstrations. Original looms didn’t survive. I would love the chance to watch someone weave one of those intricately designed tapestries. The artistry accomplished on primitive equipment in the early 1800s boggles the modern mind. At least it boggles mine. 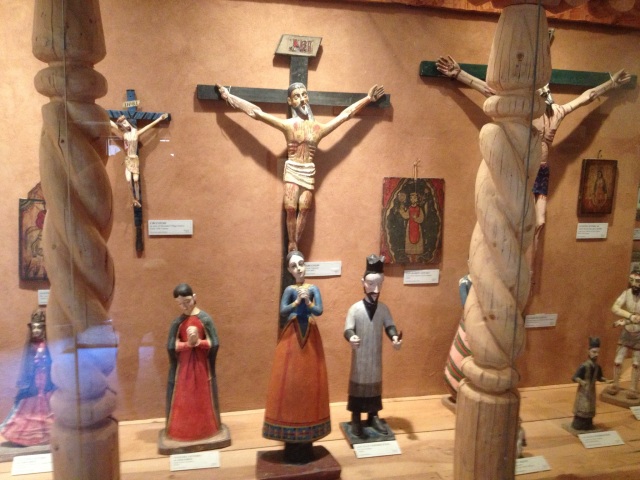 A display of religious figurines. The Mexican settlers lived their faith with an intensity that very few modern Catholics could understand. Life expectancy was about 45 years and those could be unrelentingly harsh years of cyclic famine, hostile attacks and plague-like diseases. I imagine that all that kept them going was the unquestioned belief that, if you followed all the rules and made God happy, you would be rewarded in heaven for all the earthly trials that God forced you to endure. I remember sister school operated a little like that.

A death figure. Death was a constant part of the community’s life.

Axe wielding lady in black. Again with the sister school! 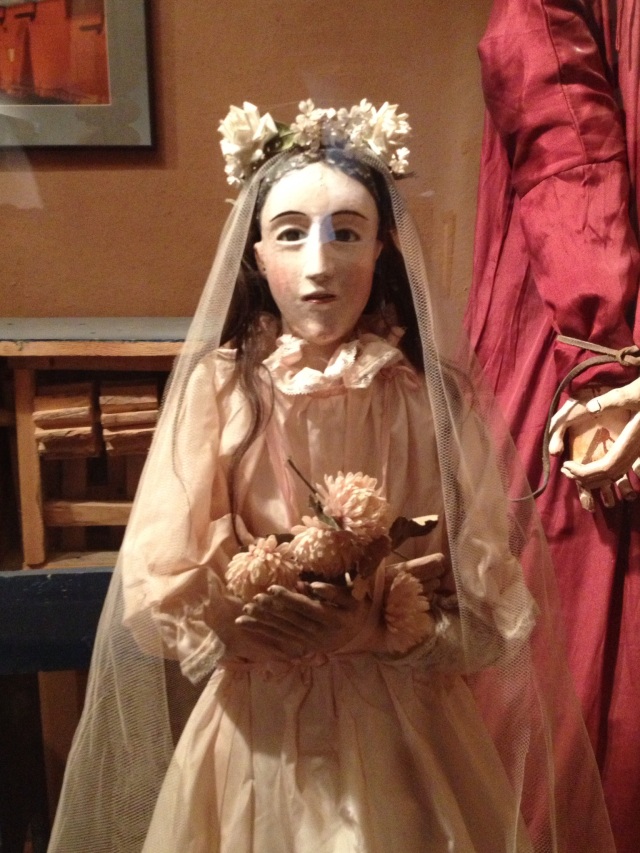 Only a half mile outside the center of Taos tourist activity, the Hacienda looks just like it might have in the 1820s. An arid desert stretching for miles. 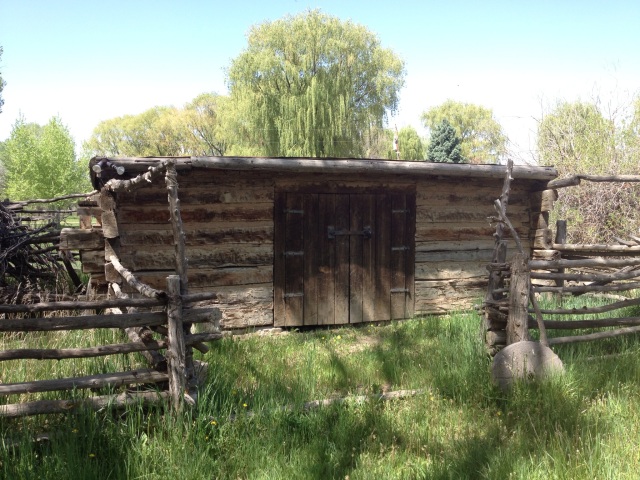 A outbuilding of indeterminate age.

We were really glad we took the time for this one last tour. It left us with a great appreciation for the early Mexican settlers and the incredible hardships they faced just to stay alive. And that was just a continuation of what the Pueblo had been doing for hundreds of years. In many ways, the harsh conditions forced the Mexicans and the natives to coexist and then to cooperate for their mutual benefit. The desert made all the inhabitants sort of equals like that.

Of course, then the US Cavalry rode in.