The Taos Pueblo is the largest inhabited Pueblo Indian village in America. Located on the outskirts of Taos city, the Pueblo is open to tourists for a $10 fee plus $6 per camera. We reluctantly plunked down the $32 and took the short tour. After a very informative and entertaining 30 minute intro to the Pueblo people and their adobe village, we were turned loose to walk around and take pictures. 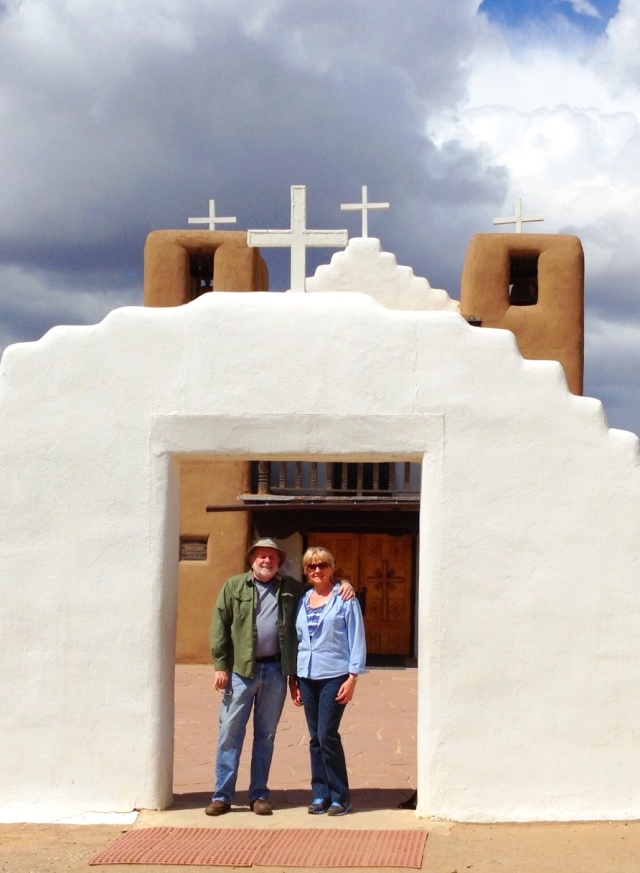 The centerpiece of the tour and the town is the “new” St. Geronimo (really) Catholic church.

Much of the statuary was rescued from the “old” St. Geronimo church.

The Taos Pueblo were converted to Catholicism by those famously persuasive Spanish Conquistadors, who used Indian slaves to build the “old” church. The natives soon rebelled, demolished the church and drove the Spaniards back to Texas and Mexico. But the invaders returned in force and soon the Pueblos were once again practicing Catholics in their rebuilt “old” church.

The status quo held until the Americans arrived after the Mexican War to claim their new territory. A few remaining Mexicans and some Pueblo went to town and murdered Gov. Bent to show their disapproval. When the US Cavalry rode up to establish peace, many of the Pueblo woman and children sought sanctuary in the church while others followed the men into the hills. The Cavalry demolished the church with cannon, killing all inside. They then hanged seven Pueblo shamen in the town square. Although that did successfully bring peace and the surviving Pueblo never revolted again, they did decide to leave the ruins of the old church as the Cavalry had left it as a memorial.

The old church. As the church was already a mass grave, the Pueblo continue to bury their dead on the site.

The village was fascinating and well worth the fee. Building with adobe blocks was explained in detail and the inhabitants still live in structures that their ancestors would recognize, except for the pickups parked outside the doors.

Many of the parts we could tour were used as souvenir shops.

Ladders were everywhere. It is important to be able to access the roof for maintenance and the upper floors of multi-story buildings are accessible only via ladder.

A local resident fetches water from the river. The adobe structures have no electricity or running water. This is a choice of the tribe for tradition’s sake and our guide said that it may be changed in the future.

The adobe buildings here reach up to five stories.

As usual, the gringos eventually wear out their welcome.

We headed out in early afternoon to drive through the surrounding mountains on the Enchanted Circle scenic route.