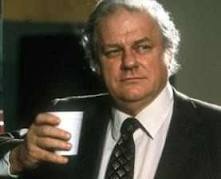 Just read the Times obituary of character actor Charles Durning, dead at 89. My god, what a tough but eventful life. One part hit me particularly after I had so recently been moved by the German boy soldier picture posted below. Evidently, Mr. Durning was a decorated combat veteran, the sole survivor when his D-Day unit was ambushed by German machine gun fire. He was awarded a Silver Star and three Purple Hearts for his valor and service but was haunted by a particular harrowing episode.

From the obit: “In the Parade interview, he recalled the hand-to-hand combat. “I was crossing a field somewhere in Belgium,” he said. “A German soldier ran toward me carrying a bayonet. He couldn’t have been more than 14 or 15. I didn’t see a soldier. I saw a boy. Even though he was coming at me, I couldn’t shoot.”

They grappled, he recounted later — he was stabbed seven or eight times — until finally he grasped a rock and made it a weapon. After killing the youth, he said, he held him in his arms and wept.

Mr. Durning said the memories never left him, even when performing, even when he became, however briefly, someone else.”

RIP Pfc. Charles Durning. Rest in Peace indeed. “Thank you for your service” seems so trite in some cases.