Mykonos is the one stop on the tour that has little historical draw. I’m sure lots of interesting stuff happened here, but there are no notable ruins, no battle sites and nothing really to compare to Knossos or Ephesus. This is just a nice island that makes its living by looking pretty for the tourists.

Wikipedia: Tourism is a major industry and Mykonos is well known for its vibrant nightlife and for being a gay-friendly destination with many establishments catering for the LGBT community.

We didn’t dock, but anchored in the harbor and used the tenders hanging outside our balcony to ferry folks ashore. 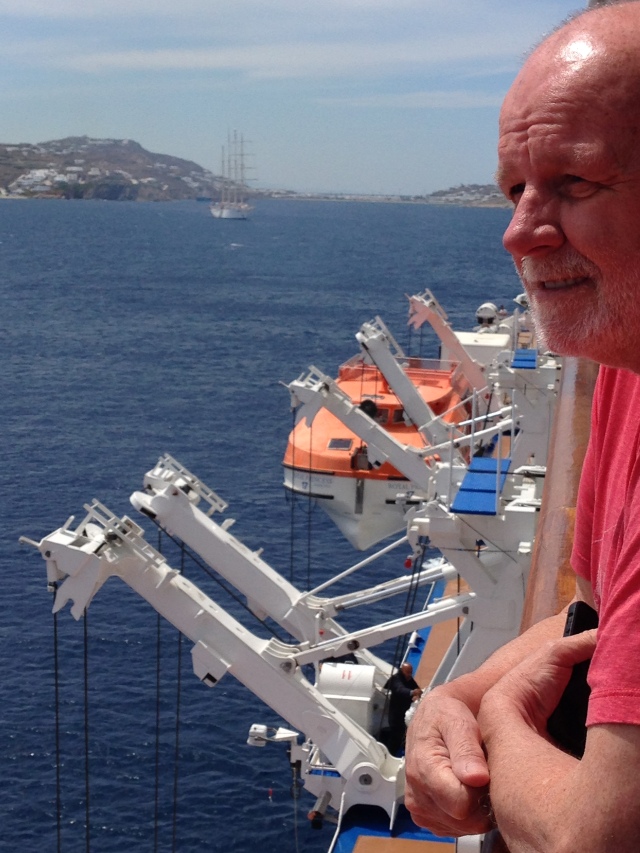 It was fun watching them lower the tenders/lifeboats to shuttle us to the island.

They claim that each can hold about 200 people in an emergency.

That would be a squeeze, but I can see it. 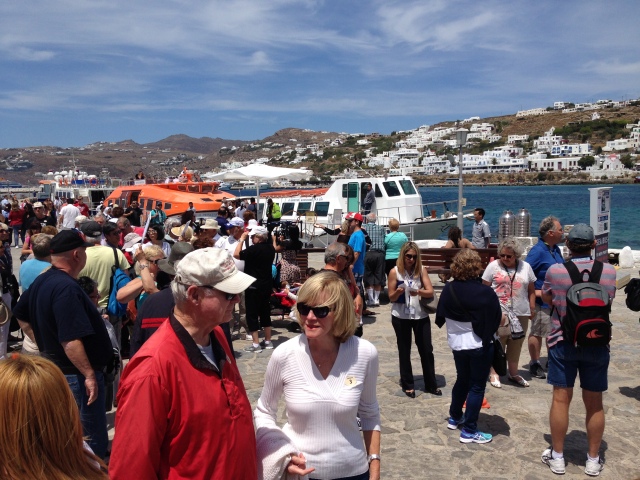 The tender dropped us on the town dock where we met our tour guide.

Her name was Marie and she was tasked with turning 30 minutes worth of island into an interesting three hour tour they can charge for. She succeeded. 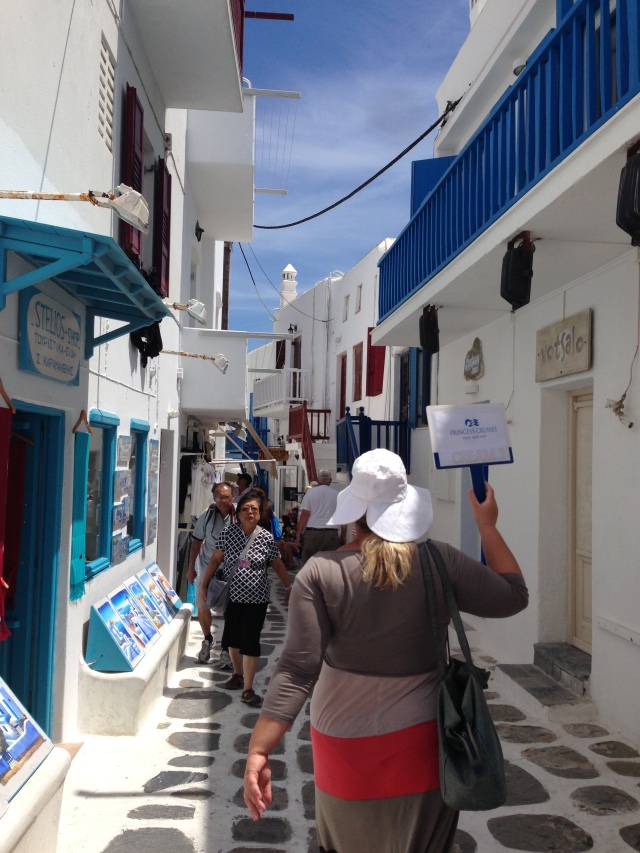 Marie led us through the narrow streets of the town. This is a prosperous island with cruise ships stopping by daily and luxurious homes dotting the cliffsides. Marie named several obscure European movies and equally obscure stars that had filmed here.

These two were evidently ordered to go clean fish out on the rocks as picturesquely as possible with the tall ship as a background. Must have been 1,000 photos taken before they were done.

Local entrepreneur skillfully guilting me into giving him a Euro for this picture. 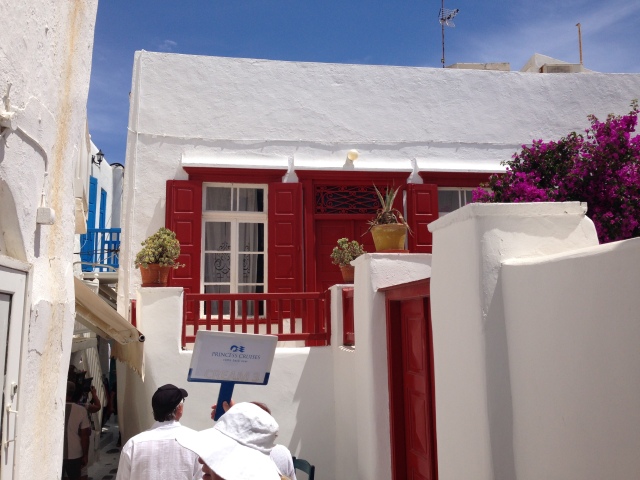 Two ships in the harbor, so lots of tourists in this small town.

The locals call this “Little Venice”. One thing I love about Europe in general is that you can always get your hand on a beer or a glass of wine without too much difficulty, should the need suddenly arise.

The old windmills lined up behind Zorba’s. Now purely decorative, they once had canvas sails between the arms. In the foreground can be seen the tourists from the second wave of tenders photographing the guys on the rock cleaning fish.

Reminds me a bit of Sweethaven from Robin Williams’ Popeye movie.

How Greek is this? 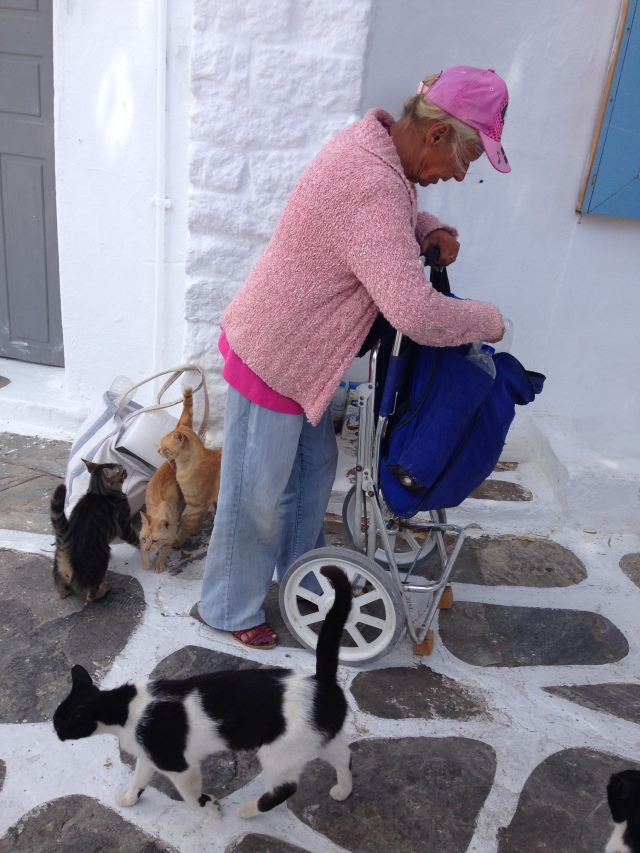 The Mykonos cat lady. On most every stop we have made on this cruise, you just had to notice an abundance of cats scattered around. Knossos, Ephesus, even Istanbul had an impressive number of cats, just lying about. I guess that makes this lady a critical cog in the tourist machine.

What must it be like to live here? I would guess very pleasant for the right kind of person. There are luxury villas and expensive resorts scattered about.

After all the ruins we’ve seen, Mykonos seems almost Disney-esque, with its freshly painted white walls and bright colors. 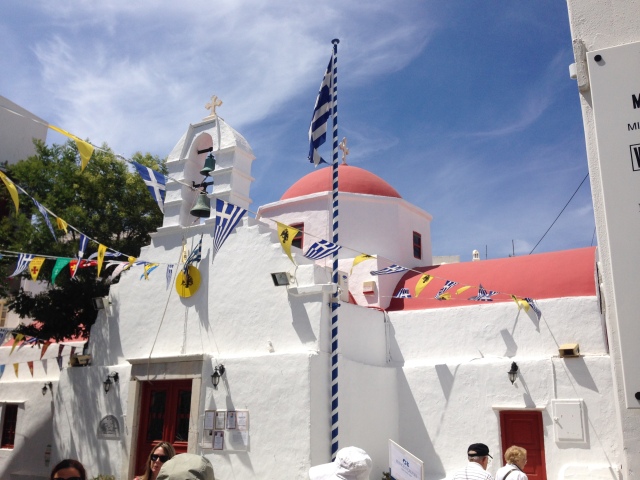 The beach. No attractive, trendy young Eurotrash to be seen, though.

A church that we followed Marie to. She told us that there were more than 200 small churches on the island since it was a tradition to dedicate a small shrine-like church to bless a new fishing boat or someone opening a new business. 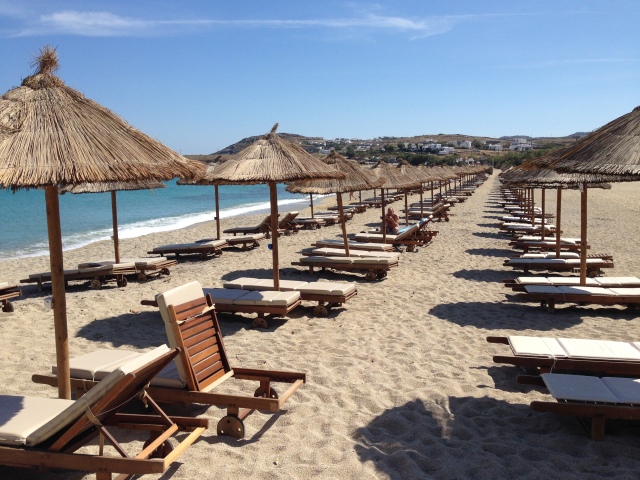 An American girl at the beach. The water at the places we have stopped in the Aegean is just incredibly clear. We keep remarking on how you can see the bottom in eight feet of water.

We followed Marie up to the monastery, which was billed as the high point of the tour.

…with a lovely courtyard. A monk was sitting on the bench while the tourists wandered through.

Inside the Greek Orthodox church, the altar was covered in gold leaf with icons mounted on every available space.

This contained a relic of some saint I did not know. 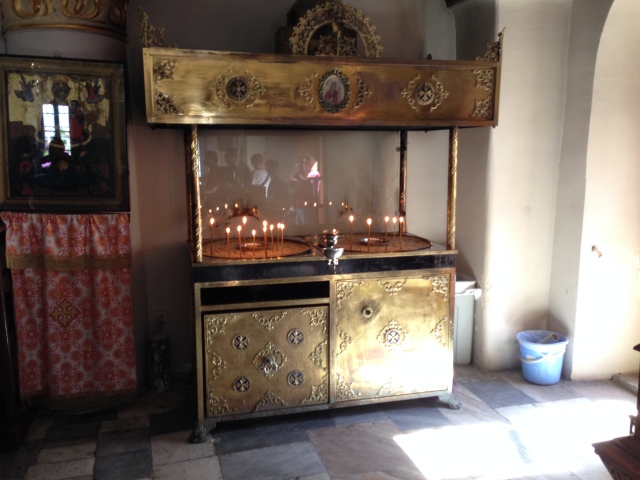 This is where you can light a candle to petition heaven. One Euro.

The front of the monastery.

Another shot of the windmills as we made our way back to town.

Now there are three ships. Royal Princess is the big one on the left. 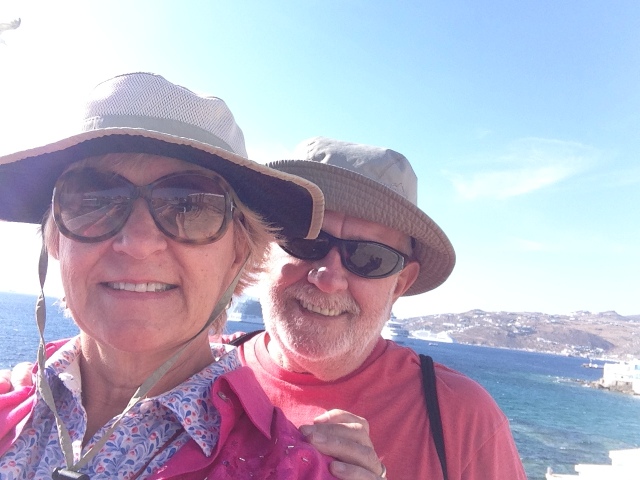 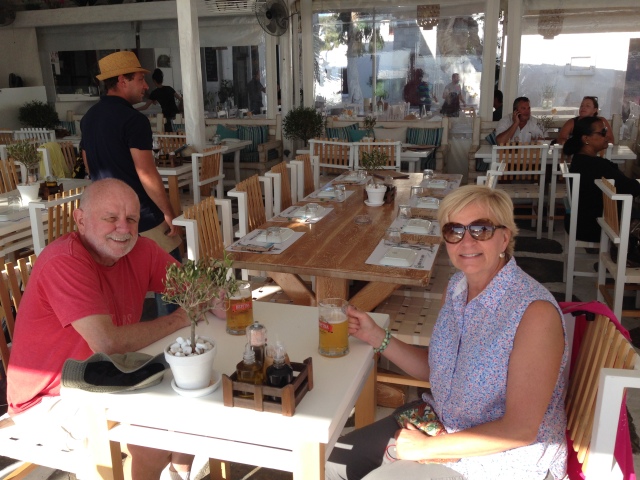 As I said, beer is always available should the need arise. A couple of brewskies before we head back to the boat. Mykonos was very nice. A beautiful low-key gem in the Aegean. No “can’t miss” tourist sites, but an incredibly relaxing place to visit.

Tomorrow, Saturday the 11th, the cruise part of our vacation ends, as we are scheduled to disembark in Piraeus and take a cab to the Acropolis Select Hotel in Athens for a three night stay.

We now have to pack and figure out how to get off the boat. Exciting! Especially since I have somehow misplaced the hotel voucher.