After a great night’s sleep, we awoke to find ourselves in the port of Kusadasi, Turkey.

Kusadasi is the modern port town built near the ancient city of Ephesus, when that great city’s harbor silted up.

Founded around 3000 BCE, Ephesus changed hands many times before it was conquered by Alexander the Great in 334 BCE and brought into the Hellenic world. Around 200 BCE, it was seized by the Romans and served as a regional capital in the Roman Empire. Saint Paul is claimed to have lived here for a while and it is featured in the Gospel of John. 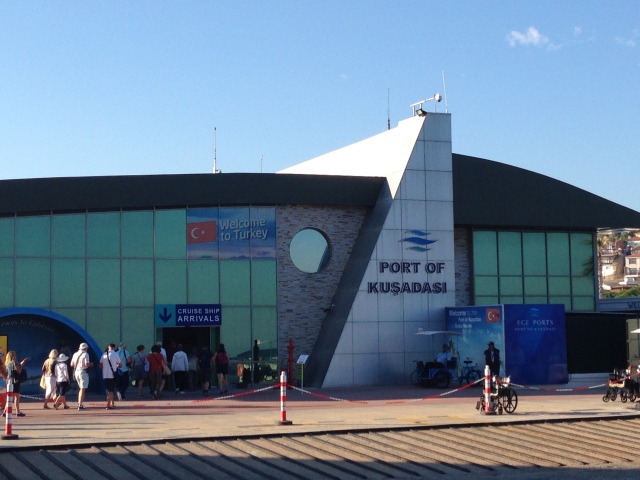 This was one of the advertised highlights of the trip, so we dutifully lathered on the sunblock and headed to the buses that would take us to Ephesus, about a twenty minute drive away. 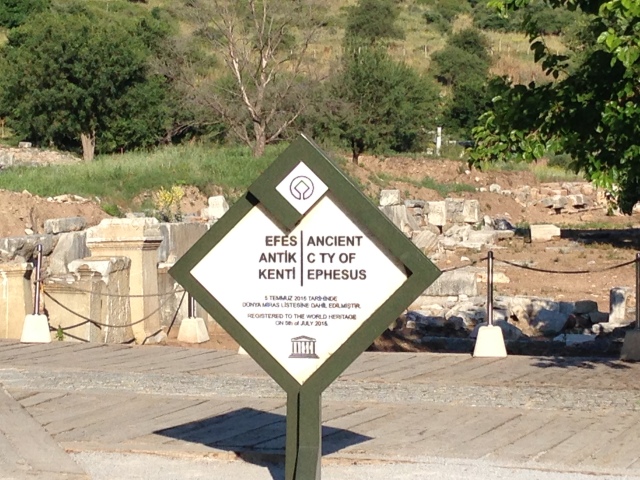 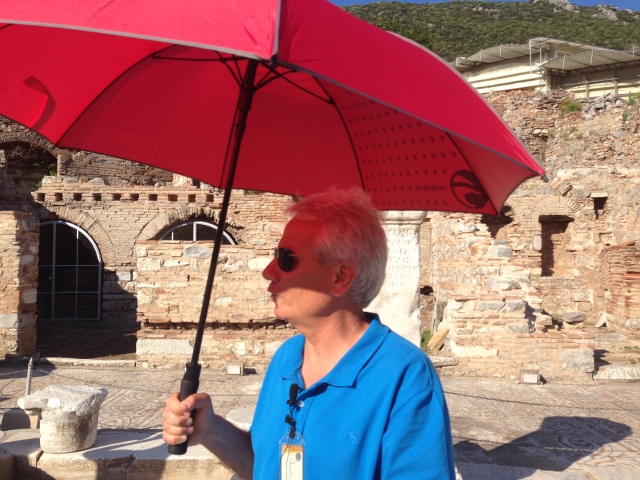 George was our tour guide. He was professional, funny, organized and deeply knowledgeable about all things Ephesus. The guides on the Princess tours were all terrific. 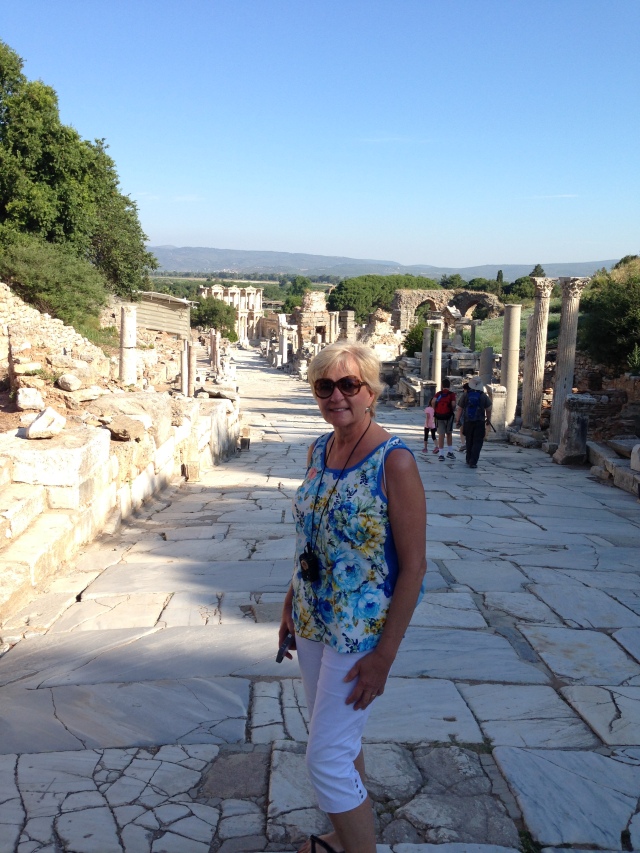 The ancient streets were still paved with stones, probably from the Roman era. Very hard on the feet. But they were put down over 2,000 years ago! My street in Marshfield has been in notably worse shape than this. And yes, this street is paved in marble.

Walking down toward the Library of Celsus.

George told us that erosion, likely due to ancient deforestation, caused the original harbor of Ephesus to silt up and the Aegean is now about 4 km away, across dusty flats.

The fact that ancient Greeks and Romans were walking around here on these very same stones, doing their daily business over 2,000 years ago is mind-blowing.

And speaking of “doing their business”, this was the public toilets attached to the nearby baths. Don’t even ask about the toilet paper situation.

A tourist favorite, the last part of this inscription seems to spell out “I love Elvis”. No one was able to provide a translation, but I doubt that the Ephesians were foretelling the arrival of The King.

The Temple of Hadrian.

Another view of the Temple of Hadrian. 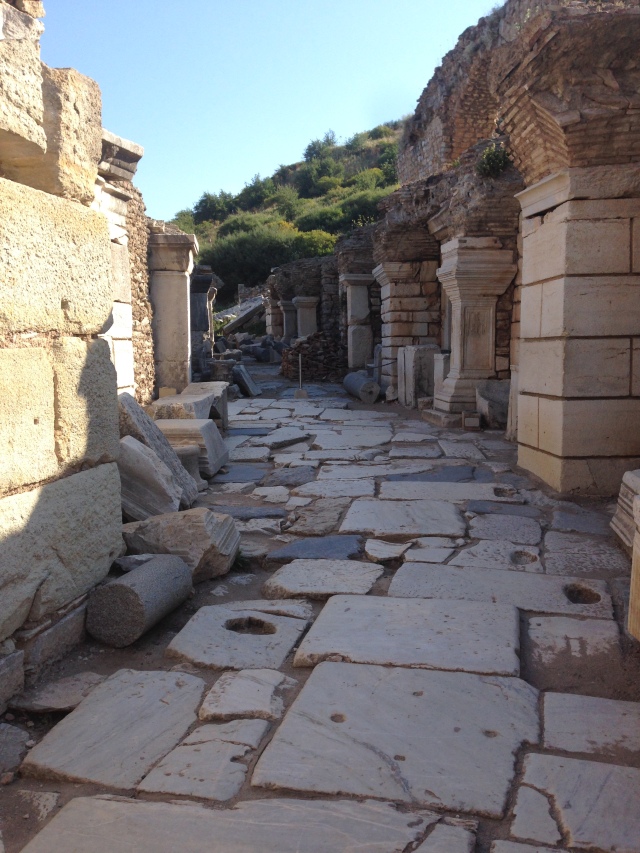 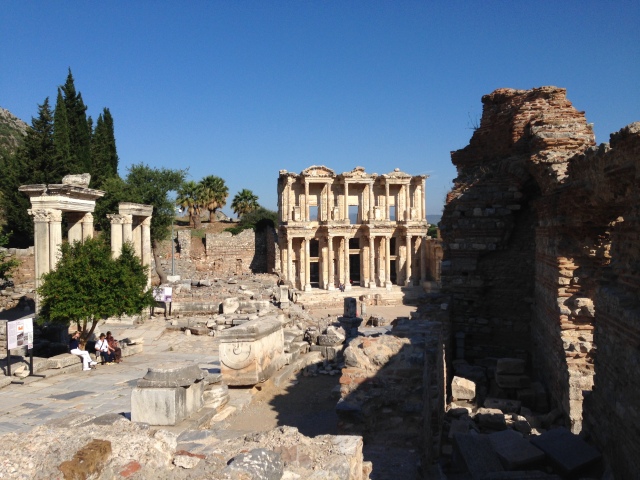 Another view of the library. The ancient facade has been painstakingly reconstructed from original pieces and fragments. It faces east to maximize available sunlight.

This was some type of shrine or basilica. The preservation of the artwork on the walls is amazing and beautiful.

One of the highlights of this site is the theater. 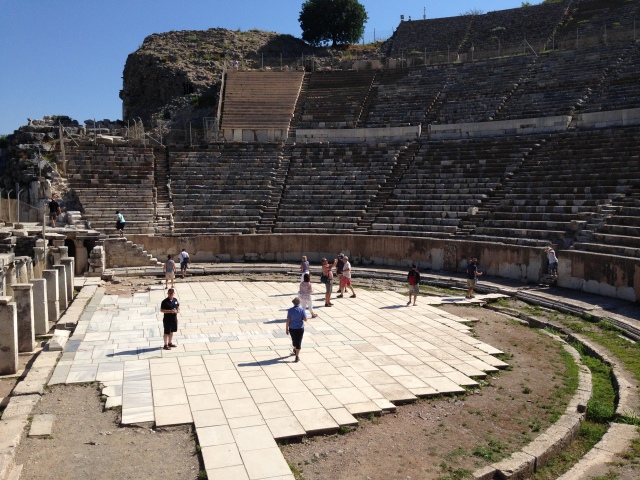 The capacity is estimated to be about 25,000 seats, giving evidence of the size and prosperity of this Roman outpost.

On a hillside overlooking the main street are found the “Terrace Houses” where wealthy Romans lived. As in modern times, the farther up the hill you lived, the cooler you were. These were all buried for centuries until they began to be excavated in the early-mid 1800s. Now a modern roof has been erected over the entire excavation to protect what’s been found and allow work to continue year round.

Several earthquakes contributed to the destruction here, and when the harbor finally silted up, the wealthy decamped to other spots and were not around to rebuild yet again.

We walked on glass floored walkways suspended above the excavated treasures.

The colors were amazing

It’s hard to tell from the angle of the photo, but this lion mosaic is on the floor. 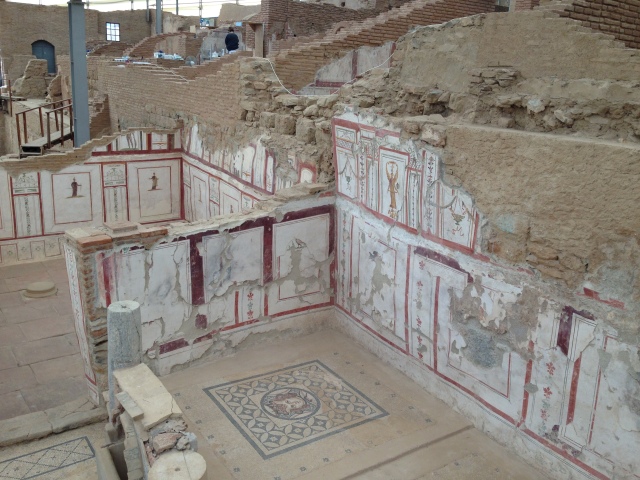 You can visualize the actual layouts of the houses. Of course, much of the artwork and statuary have been hauled off to the British Museum and the museum in Athens, but what remains is breathtaking. 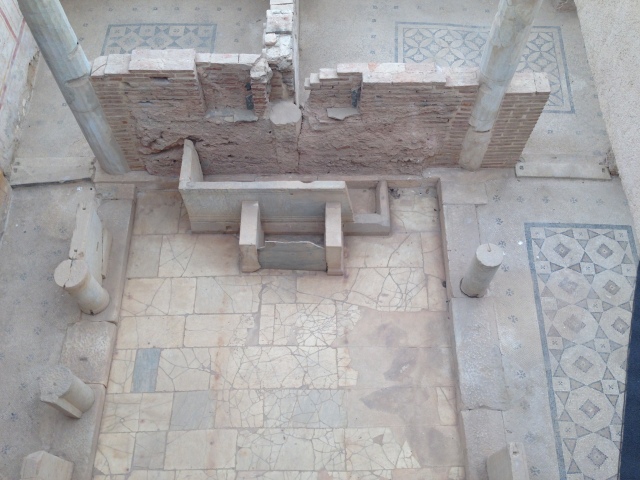 Probably a roofless courtyard. The building skills are really impressive. These folks were as smart as anyone today, they just hadn’t had time yet to discover all the things we now know.

Boxes and boxes of pieces of ancient art await sorting. 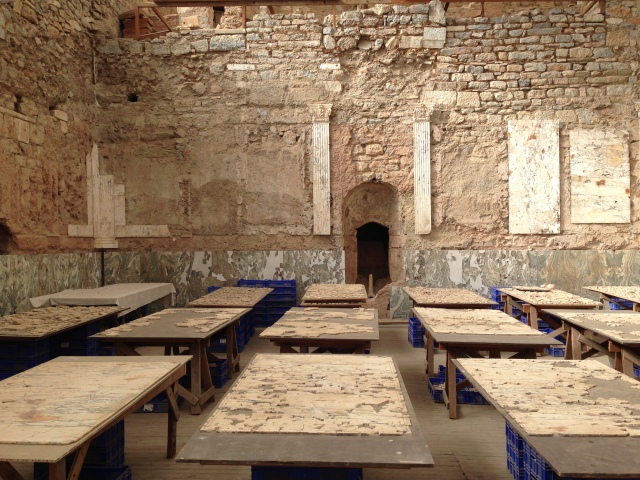 This is, I guess, what archaeology really is.

The endless sorting and piecing together of broken chunks of world heritage.

Here someone is reassembling a wall mural from the scattered fragments. 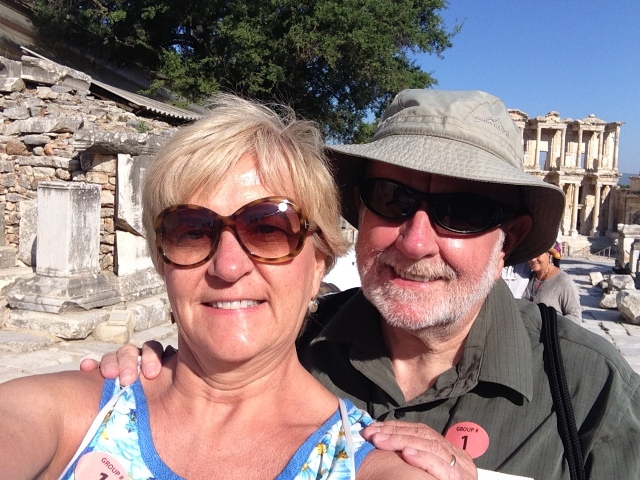 Ephesus was fantastic. We walked at least couple of miles in the heat, but there was always something great up ahead to keep you going.

Then it’s back on the bus to feed the REAL economic engine of Kusadasi.

Tourist trinkets! I assume that these little knick-knacks have some relationship to fertility but I was embarrassed to ask. 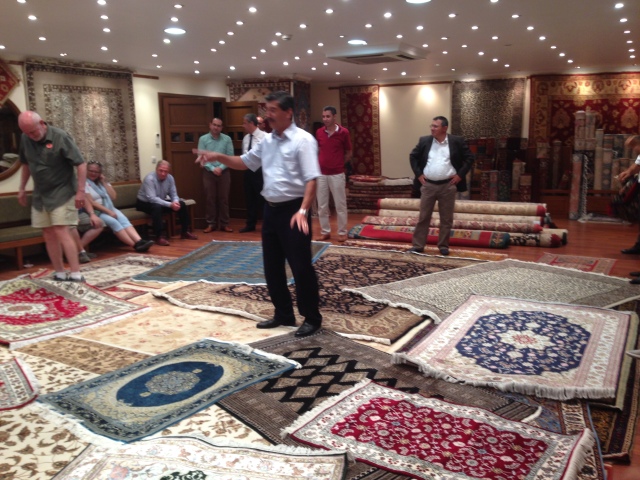 We sat politely through the presentation, sipped some apple tea, and fled at the first opportunity.

It takes months to complete one of these rugs and they’re entirely hand woven. That’s one reason why they are so expensive. Price is heavily influenced by: 1) Material used, 2) Knots per millimeter in the weave, 3) Estimated size of tourist wallet. 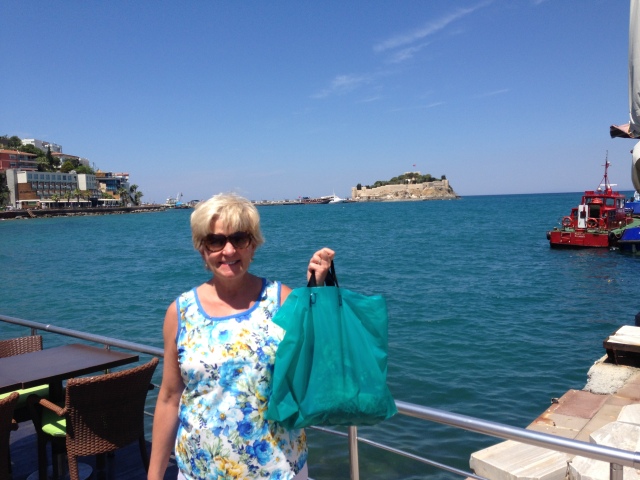 We dodged the rug sale, avoided the jewelry bazaar, but were snagged by a delightfully aromatic leather store.

Soon we were back aboard and awaiting another splendid dinner.

1 Response to Cruising the Aegean – Day 5: Kusadasi and Ephesus