After awaking in Chambersburg on Sunday morning, we sought a goal for the day. We decided to head for Hershey PA. What do you think we found there? 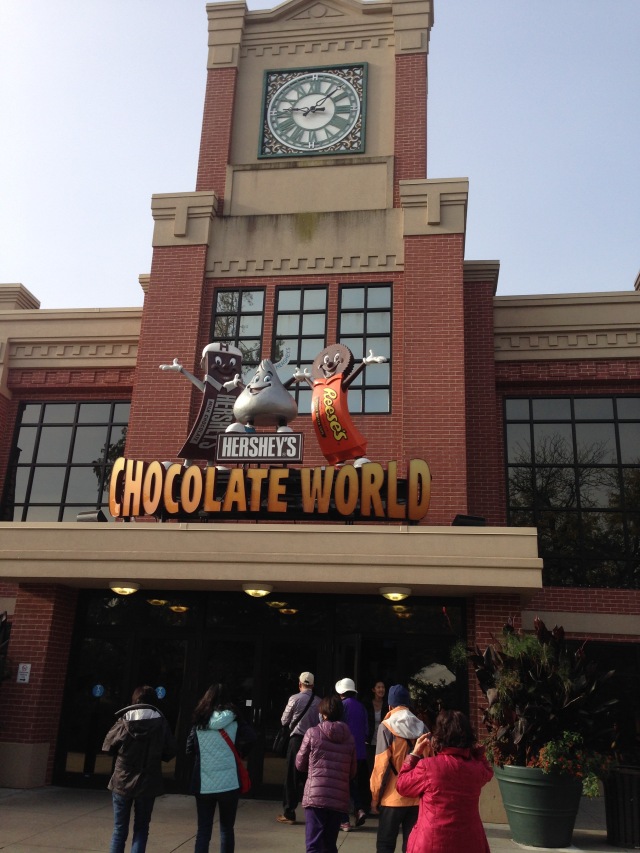 They had thousands of pounds of every candy Hershey ever made, in every conceivable size and flavor.

It was like BJ’s Wholesale for folks who crave diabetes. 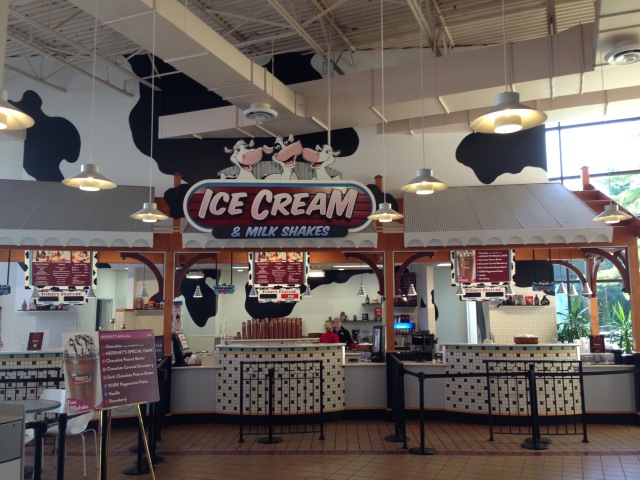 No one who knows Joe and me will believe it, but we bought NOTHING! We each got a tiny complimentary, airline-size bag of pomegranate flavored chocolates and that was it. Really.

But we did take the free tour. It was reminiscent of “It’s a small world” with both the good and the bad connotations that go along with that comparison.

We knew that we could easily excuse filling the car with bags of goodies (Hey! It’s almost Halloween!) that would never make it home. But that way lies madness. Or at least hypoglycemia. We left empty handed.

We had pretty much decided by now that we could make it home today if we wanted. It wasn’t appealing to spend a night in CT or NY when three more hours would get us home. Since we had run out of destination goals, it was maybe time to tie a bow on this trip.

We followed I-81N out of Hershey. About the time we passed Wilkes-Barre, I saw a sign that said “Don’t miss Steamtown! Next exit!” Joe was driving so I did a quick online check of this “Steamtown” and yelled “Take this exit” at probably the last minute.

We got off in Scranton and drove around a lot of construction until we saw a sign for “Steamtown National Historic Site” and pulled into the parking lot.

This facility of the National Park Service occupies 66.5 acres of what was once a huge train yard and maintenance facility for the Delaware, Lackawanna & Western RR. The old (but still functional) roundhouse holds about 6 parked locomotives and a multitude of exhibits. This is the main focus of the museum, along with steam and diesel train excursions on the adjacent tracks. There are also literally hundreds of locomotives and rail cars scattered about the property in varying states of decay. Many were sent from a single private collection, the now defunct “Steamtown USA” in Bellows Falls VT.

The roundhouse museum is beautifully kept with a well restored steam engine sitting on the working turntable. (#790 Built in 1903 for the Illinois Central RR)

We went on the excursion, of course. 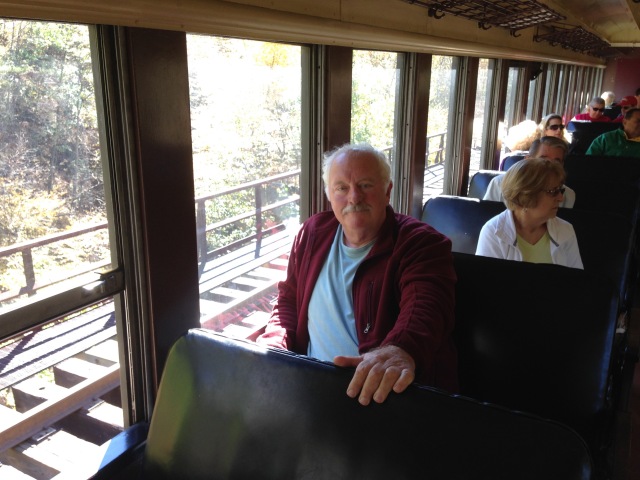 It was a bit disappointing that it was a diesel loco not a steamer, but the ride was fun. Slooow, but fun.

We rode about a mile from the roundhouse and then returned.

Not all of the trains are restored. Many have spent the last 50 years or so sitting on sidings in Bellows Falls or elsewhere, just rusting away. Some are so bad that it was accepted that the NPS could never afford to bring them back on their small budget. They have 12 NPS employees slowly working on the best candidates for saving but, according to our guide, any of them could make three times as much in the private sector so turnover is frequent.

But they have some great exhibits.

Doing a Truman on The Scranton Express.

A Mail Train with sorting boxes and bag racks.

This was fascinating. A cutaway of a steam engine. Take the simplest concept (hot steam expands) and develop it into the biggest, most complex machine that 1910 technology can devise and then haul a mile of coal cars over the mountain. But it’s still a steam engine, so it’s still pretty easy to figure out what every apparatus and gizmo does. Cool.

This is dedicated to all of the hard working men and women blah, blah blah. Cool handcar, though.

The maw of the infernal machine. Pick up a shovel son, you’ve got work to do. 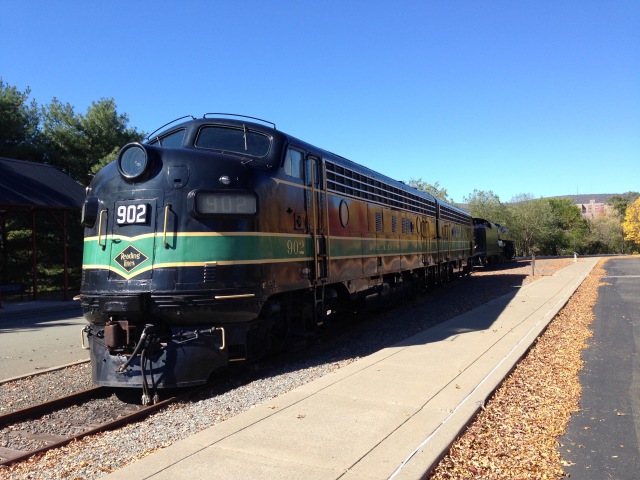 Take a ride on The Reading RR. Not steam, but functional.

This is one of only 8 survivors of the 25 Union Pacific 4-8-8-4 articulated “Big Boys” ever built. It is so long that the two sets of eight driver wheels each pivot independently to allow it to follow standard curves. This beauty sat outside for years in VT and will never run again.

“Big Boy”, a 4-8-8-4 type locomotive built by American Locomotive Company in November 1941, is among the world’s largest steam locomotives and weighs 1,250,000 pounds. The Steamtown Special History Study recommended that it remain at Steamtown as it is the only articulated type in the collection. It also recommended that it remain on static display, as it was doubtful that the “track, switches, culverts, trestles, bridges, wyes, turntables, and other facilities that would have to carry her [could] bear her great weight”. In fact, since the Steamtown turntable and roundhouse were inadequate for its size, Big Boy has remained out-of-doors since its arrival at Scranton.” 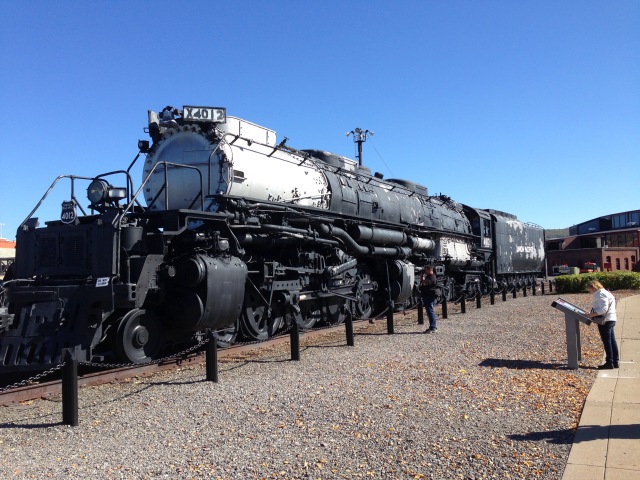 I hope that they at least repaint her. She’s irreplaceable.

Steamtown was a great “find” on our way home. By early afternoon, we were done and back on I-81N when the decision was made to drive straight through to Cape Cod and get home tonight (Sunday). I dropped Joe off on the Cape and made it to my house by about 9PM.

We had driven 2358 miles in seven days, visited several venues from my informal bucket list, and Joe and I never once killed each other.

2 Responses to Hershey, Steamtown and Home