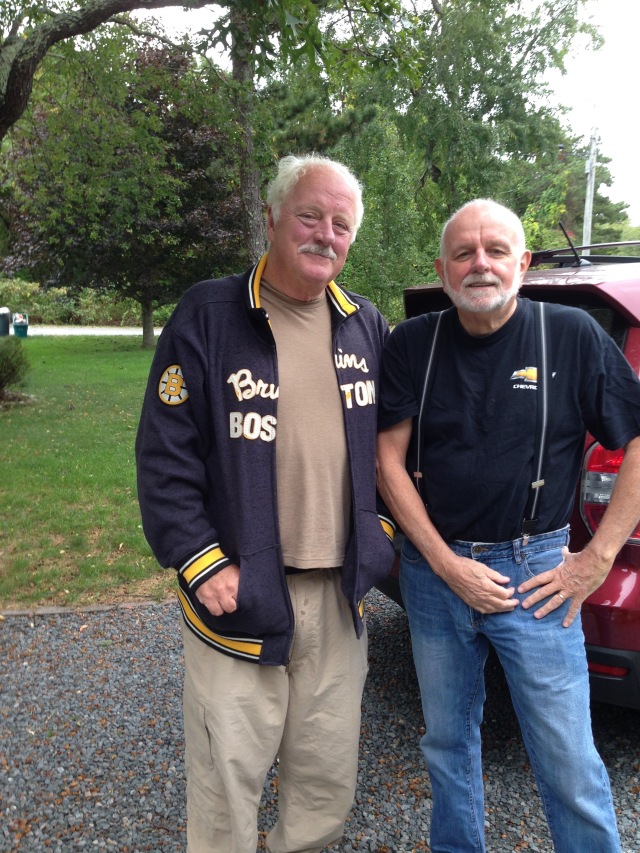 For a couple of years now, I have had my heart set on traveling to Detroit and visiting “The Henry Ford”. They don’t call it a museum any more because “There’s so much more than just a museum!”,  but that’s really the part I’m interested in. That and the River Rouge factory tour.

Anyhow, after all my medical drama had settled down and I had no pending appointments for a month or more, it was time to finally put together the trip.

It was easy to get my friend Joe on board as he is basically willing to drive anywhere interesting that I can think of . His only requirement is that I make ALL plans and just tell him where to meet up.

The substantial upside is that I gain the company of an old friend and easy travel companion, with tastes similar to mine, who can reliably drive all day, if I let him. A win-win.

I picked Joe up at his house in Sagamore Beach on Monday morning in my 2015 Forester. We packed 10 days of socks, skivvies and tee shirts and two pairs of Levis, along with a big bag of snacks provided by the lovely Mrs. Jeff and Mrs. Joe. They seemed happy to let us go.

We drove I-495 to I-90 into Buffalo and then hopped onto NY-5 west to our first stop at the fabulous Holiday Motel in Westfield, NY. The kind of “fabulous” that you get for $77.63 per room. It was clean, handy, safe and cheap. And the free wifi worked great. 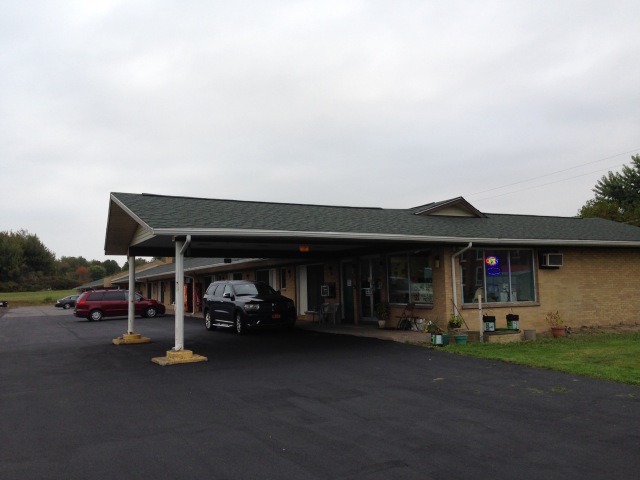 Why it’s a little treasure right there on (or near) the Lake Erie shore!

We had dinner at Galargo’s Italian Restaurant in Westfield, which came highly recommended as “the only place still open after 7 pm”.

It was a nice place, the staff was friendly, the other patrons seemed to all be older folks and the appetizers were delicious. We were therefore quite surprised when the entrees tasted like dog food. I had inedible lasagna and Joe had a bad dish of something else. Word on the street was right on the money. Avoid Galargo’s.

We drove to the shoreline to checkout the local beaches. It was out of season and everything was closed, but the beach signage was less than welcoming. 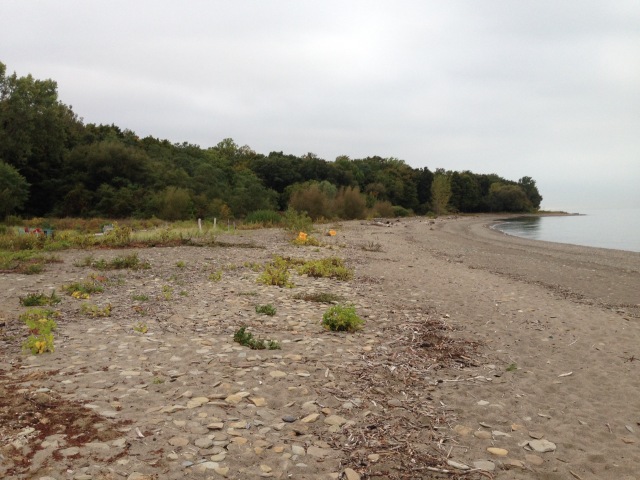 And the public part of the beach was pretty crappy, any way.

One agreement before we left was that we would try to get off the interstate and drive through the countryside as much as possible. Therefore, the next morning (Tuesday at 8am), we drove Rt-5 along the shore of the lake toward Erie and then Cleveland, through miles and miles of grape vineyards. We had seen that Welch’s Grapejuice had a big facility in Westfield, where we saw several trucks unloading crates of freshly harvested grapes as we drove to our unfortunate meal at Galargo’s.

As we drove along, Joe and I were puzzling over exactly how one would harvest the all these fragile grapes without needing to import 500 migrant farm workers. Then, as we drove Rt-5 along the coast toward Erie, the answer became apparent.

Along the side of the road, we spied a grape picking crew that was driving a specialized harvester along the grape vine rows, shaking loose the purple berries and dumping them onto a conveyor belt that led to an accompanying hopper truck. Three men could pick an entire vineyard in as much time as it took to drive down each row. Cool.

We watched in fascination for about twenty minutes before we continued on to Erie.

Now, I’ve had a bad impression of Erie ever since I used to travel to the big GE Locomotive plant here on business. I remember bricked up factories along the main street, abandoned houses and a city pretty much fallen on its butt, economically.

This time,  driving on the byways, I was very surprised to find some lovely neighborhoods with fine well-kept homes lining tree shaded streets. I guess you get a warped perspective when you bypass the places where folks live and drive right to the industrial core of the city. Joe and I saw condos and apartment buildings going up all along the waterfront. I’m sure that neither the good nor the bad impression of Erie is wholly accurate, but it was nice to see the good side of the city.

We drove the seven miles through Presque Isle State Park which wraps around the Erie shoreline and provides bike paths and jogging trails with the pretty backdrop of the lake. 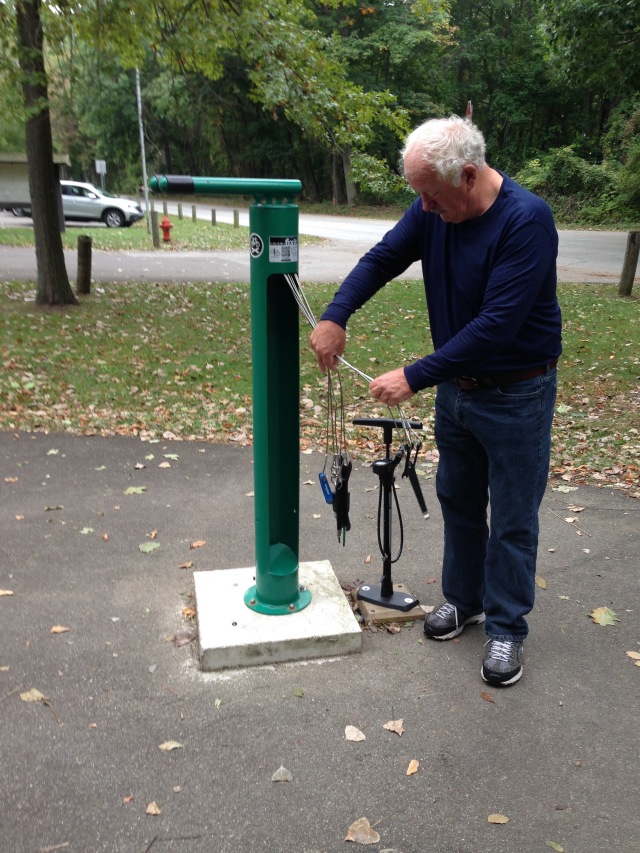 Along the drive in the park, we found a pretty innovative idea. A pole mounted bike repair station with all the tools that you would need to fix a problem, including a pump. The green post doubles as a bike stand so you can work with both hands.

We continued west on Rt-5 then US-20 into Ohio. As it was still pretty early, we planned to make Geneva Ohio or thereabouts for lunch and then on to the Rock and Roll Hall of Fame in Cleveland.

1 Response to Another Driving Adventure.