A Week in the White Mountains – The Luncheon Train 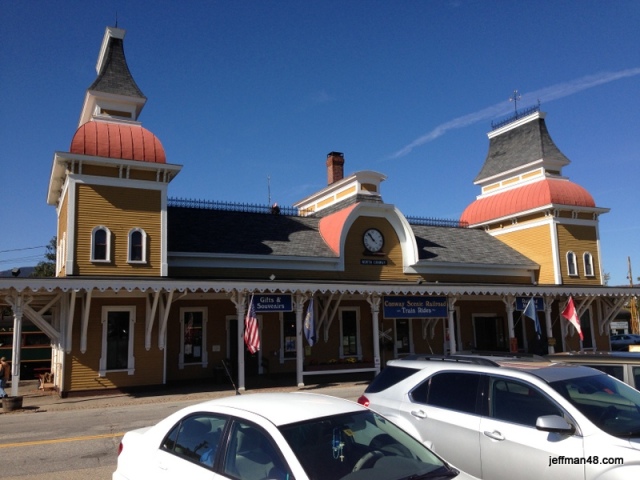 The room we had in the Eastern Slope Inn was away from the main hotel. We shared our parking with the Conway Scenic Railway. Every morning we were awakened by the rather pleasant sound (to me, anyway) of the trains being moved into position for their morning runs. This was after 8:30 am, so really, no one should complain about a few loud train whistles and an idling diesel engine or two. 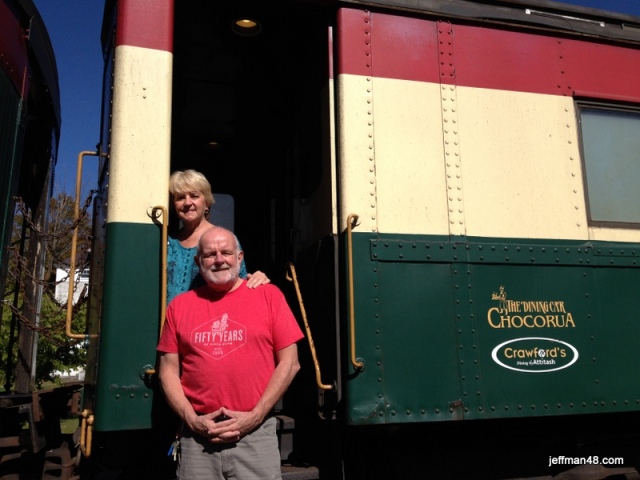 We decided to take the luncheon train, which was an hour and 45 minute ride up the tracks to Bartlett and back. There is also a longer, 5 hour train ride up to Crawford Notch, but that seemed a bit much. 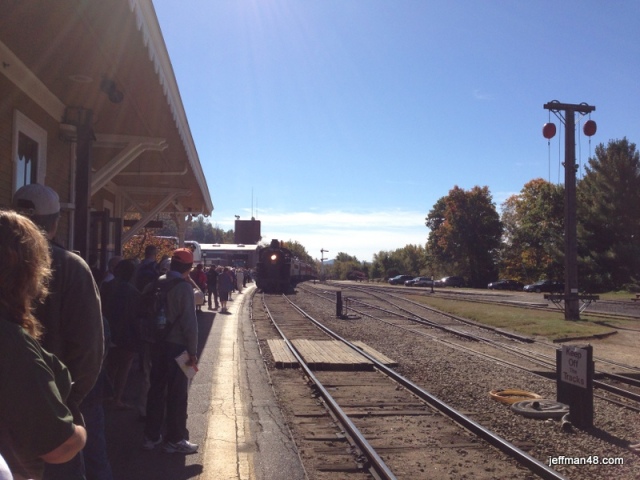 The cars for our train were towed to the loading spot by one of the big old steam engines, No.7470 from the Canadian National Railway. But then a diesel was substituted for the actual trip. 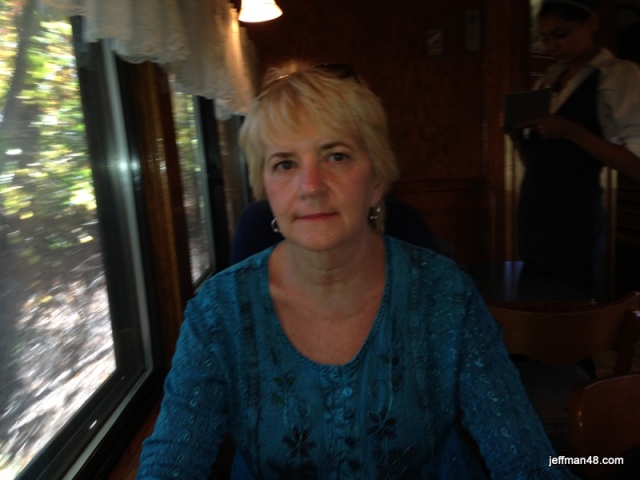 The train was nice. Our car, the Chocorua, was a finely detailed Pullman parlor car that had been converted beautifully into a dining car by the CSRR.

The food was…OK. It was provided by the dining service at Attitash, the big ski area in Bartlett. And the ride was nice as we rode through the forest at about 12 miles per hour with the whistle sounding long-long-short about every five minutes as we came to one of the many ungated crossings. Lots of waving to and from folks in the waiting cars as we pulled by. We got off in Bartlett to watch the locomotive do a "runaround" to the other end, but we could’t see much as the train cars were between us and the siding the big diesel used for the maneuver. Then we climbed back aboard for the uneventful return trip to North Conway.

It was fun and the people were nice. The ride to Crawford Notch would have been more interesting, if only because I have seen the condition of some of the trestles on that route. It would be fun, and exciting maybe, riding the shaky rails that seem to just cling onto the side of the mountains, as the twin diesels slowly haul the train up and up the steep 6% grade to the notch. But five hours? No. 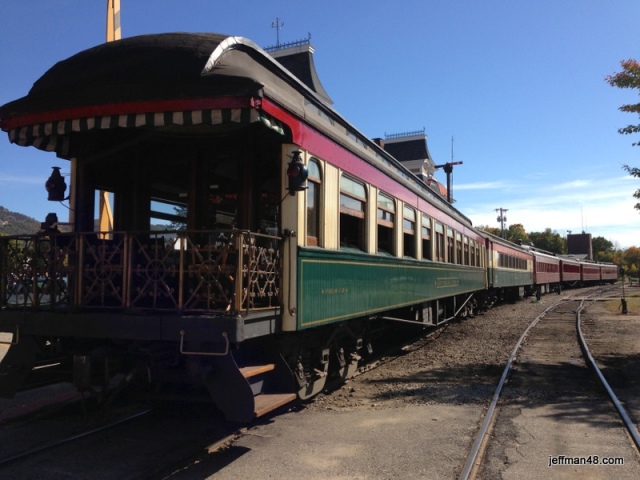 So we returned to the original station and went over to the Freight Depot (after checking out the roundhouse) where the local model railroad club had their setup. 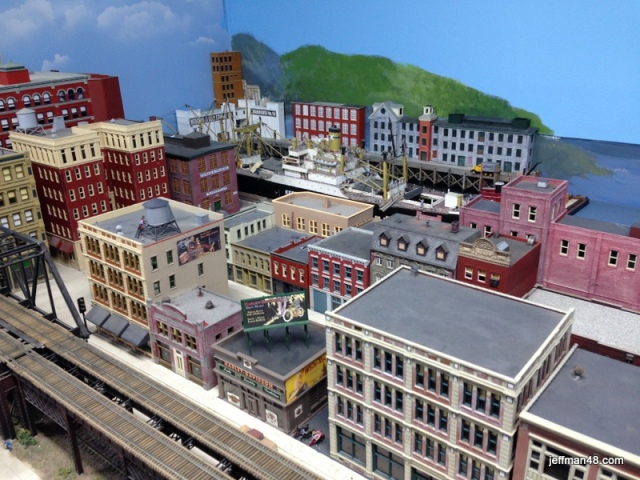 Now this was cool. It was designed to represent Portland, ME with the seaport and a large cargo ship and authentic company names on the various businesses. 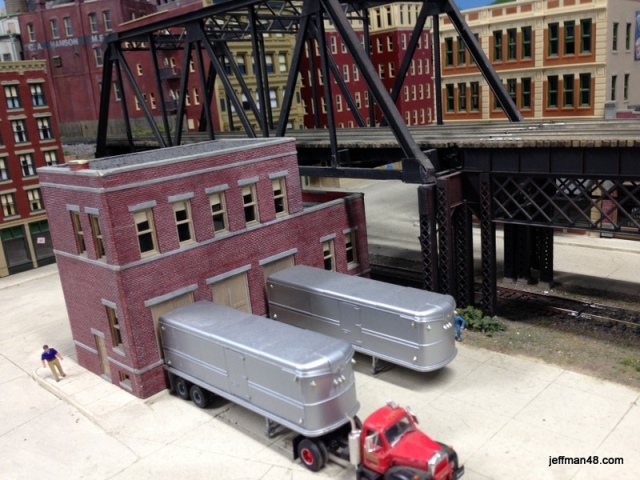 The layout was impressive with really fine detail. I was told by the two club members present that it has been worked on continuously since the 1970s. 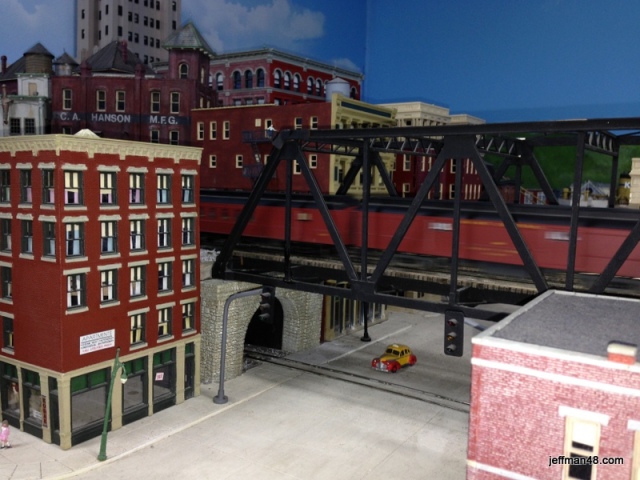 One really fun part was a tiny video camera mounted on a flatcar that was pushed by a locomotive all through the little town. The resulting video was fed in to a large TV set mounted under the layout. Watching the video feed gave a super realistic impression of an actual train barreling through an actual town. All the minor imperfections and little cues that tell you these are miniatures when you look at the static layout disappear when viewed at "ground level’ at a scale 30 MPH. I must have watched about eight complete circuits. The members were a lot of fun to talk to, as well.

I admire people who bear the significant personal expense and then put in the hours and hours of painstaking effort needed to achieve such an incredible level of authenticity. I do think they might be just a little nuts, but in a good way. Like those folks who deck their homes out with incredibly over-the-top Christmas decorations, but in both cases I really do appreciate their willingness to go that last crazy mile just to entertain the rest of us. Thanks, guys (and it’s almost always guys, I’ve noticed).

Well, I’ve been in here about an hour. Almost more fun than riding on the real life train, but Betty is waiting outside so I must run.