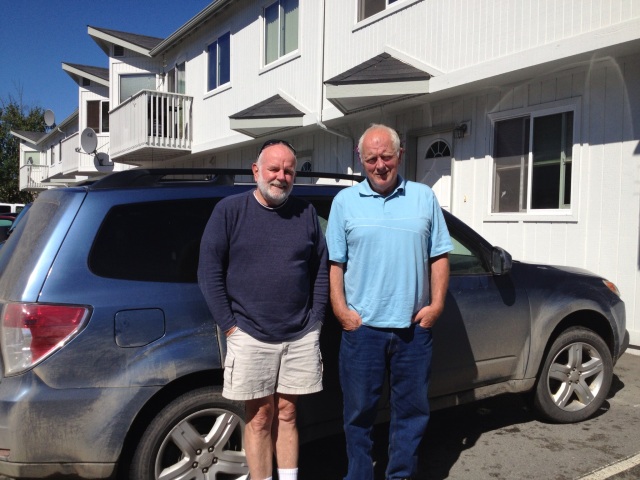 Not to spoil the surprise ending, but after 14 days and 5,375.5 miles, we are safe and sound at Pauline’s in Anchorage, AK.

Due to the lack of wifi at our last Alaska stops, first in Tok and last night in Glenallen, I have been unable to post. In addition to wifi, other notable shortcomings were decent food, acceptable lodging and good weather. But that’s part of the adventure, right?

The hotels were pretty slummy, but barely clean enough. 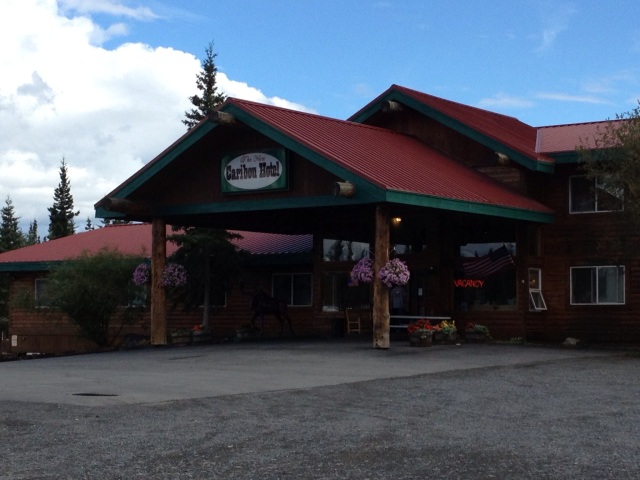 The fabulous Caribou Hotel in Glenallen. I believe that some actual caribou occupied our room before we did. But I don’t want to dwell on the negatives as the positives greatly out weighed them.

Picking up the thread, we left our intrepid travelers awakening in Watson Lake in the Yukon.

Just northwest of there, we crossed the continental divide. 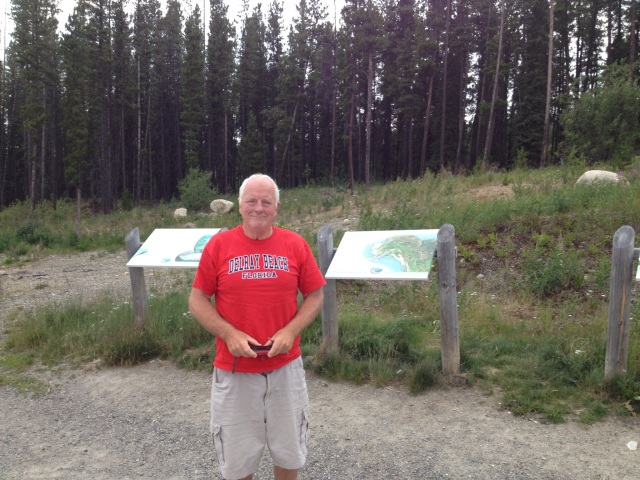 There were a couple of markers on the spot indicating that Joe would flow towards the Pacific from where he stands. But you can never be sure with Joe.

From there we traveled to the capitol, Whitehorse, where we planned to stop, have lunch and tour the town’s attractions. 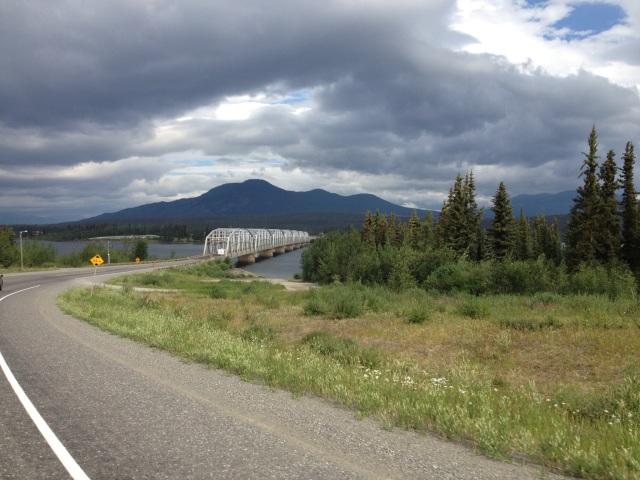 We crossed an attractive but narrow bridge and found Whitehorse to be a pretty nice small town. We are told about 27,000 Yukoners live here. That’s two thirds of the inhabitants of the huge but sparsely populated territory. 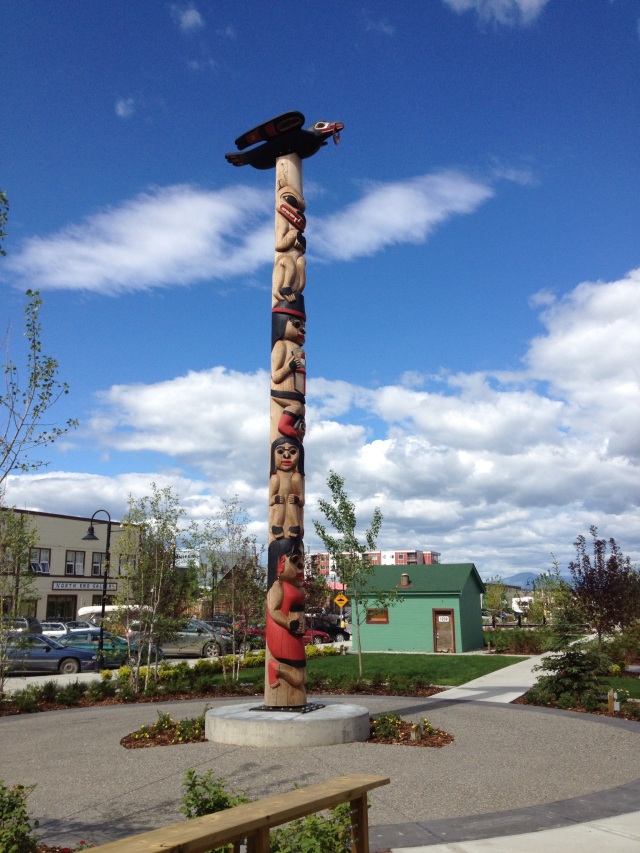 There was a modern totem pole installed next to the old train station. The trains no longer run, but the station now functions as a small municipal museum. 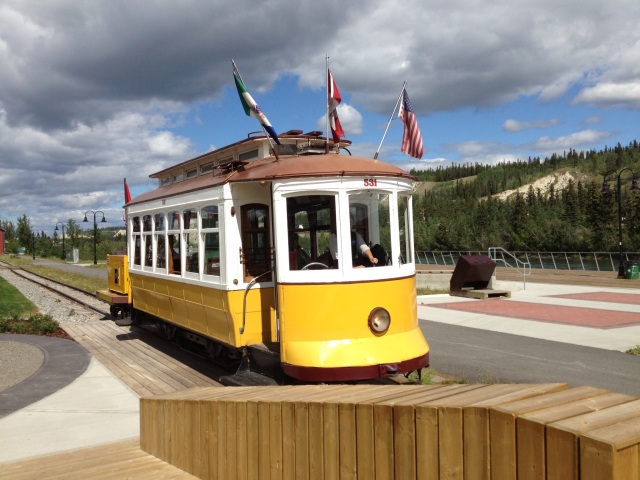 And running on the old tracks is a summer tourist trolley. Built in the US by Brill in 1925 and then operated in Lisbon until the early 70s, it was installed here in 1977. Since Betty and I rode on the same type of trolley in Lisbon last year, I had to drag Joe on board for a ride. 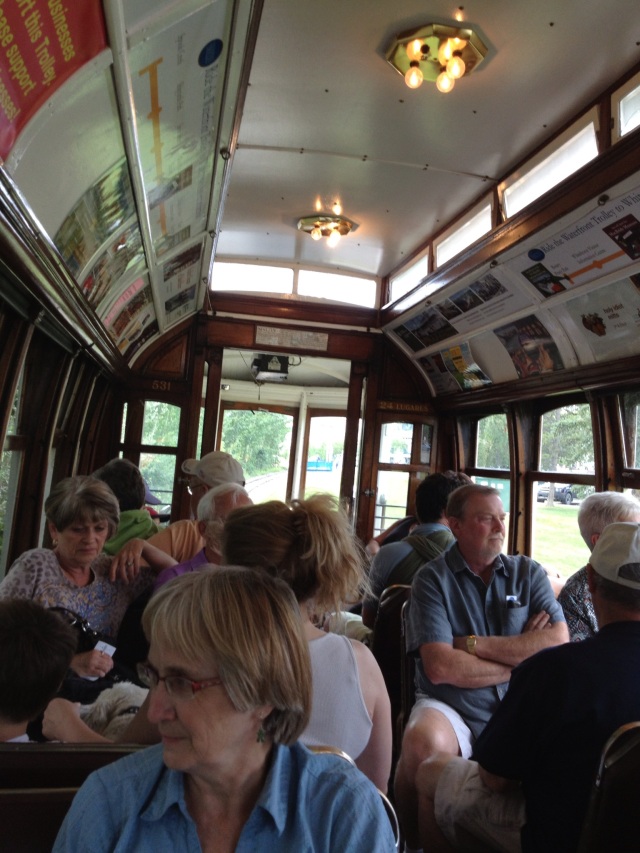 It was a fun ride, if only for a few hundred yards, …excuse me, I meant meters. 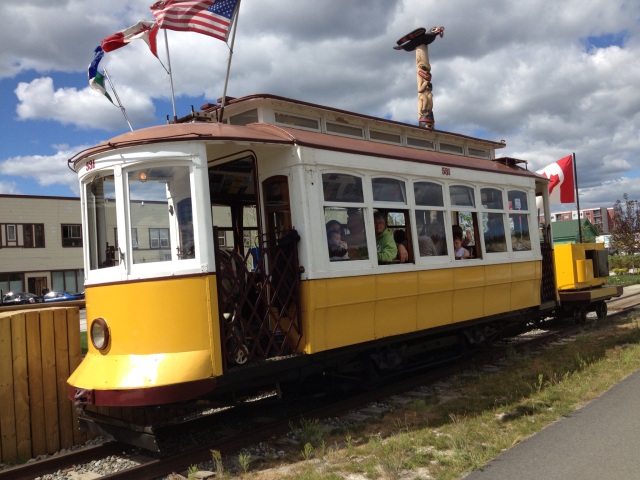 In order to operate the electric trolley, they cleverly tow a portable generator behind. 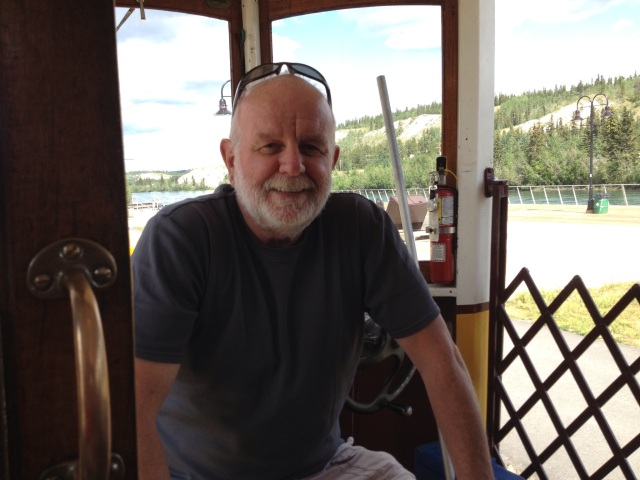 Yes, I really do love this trolley stuff. 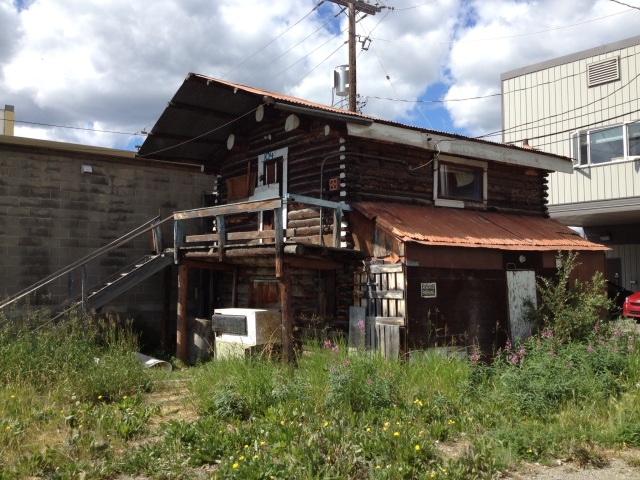 A few structures in the town were very “authentic” looking, but most were very well kept. 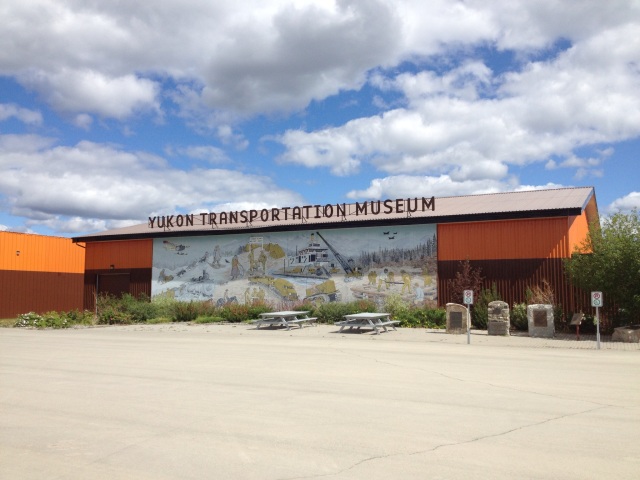 Another highlight of the town was the transportation museum. 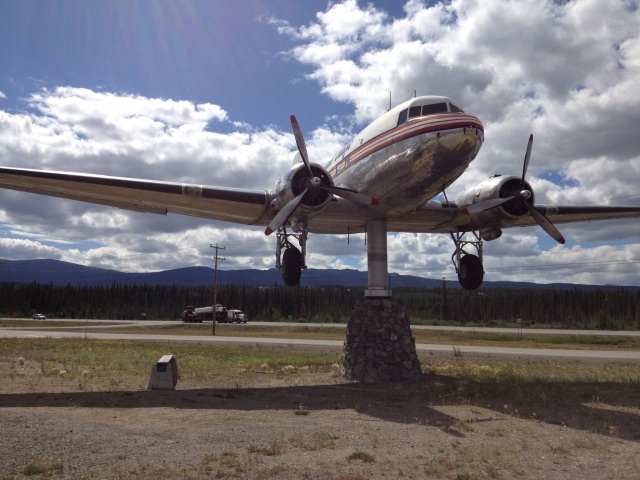 They had a DC-3 out front mounted on a pylon so that it would always face into the wind. 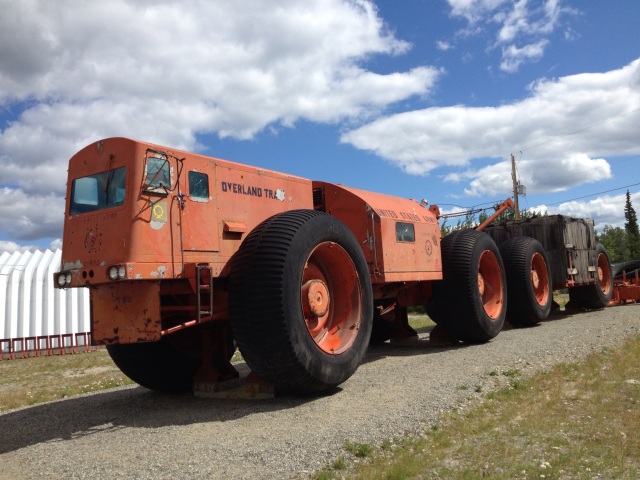 This is one of those giant arctic transporters that the US Army used to build the Alcan Highway and all the related infrastructure during WWII and the early cold war. 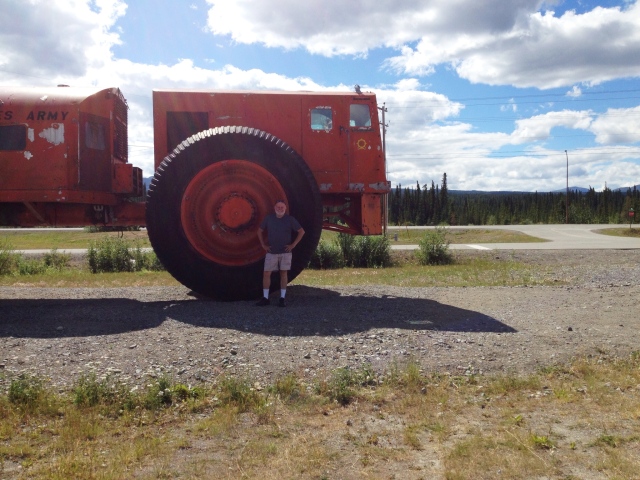 I would love the chance to drive one, but this sample hasn’t been fired up since the 1950’s, at least. 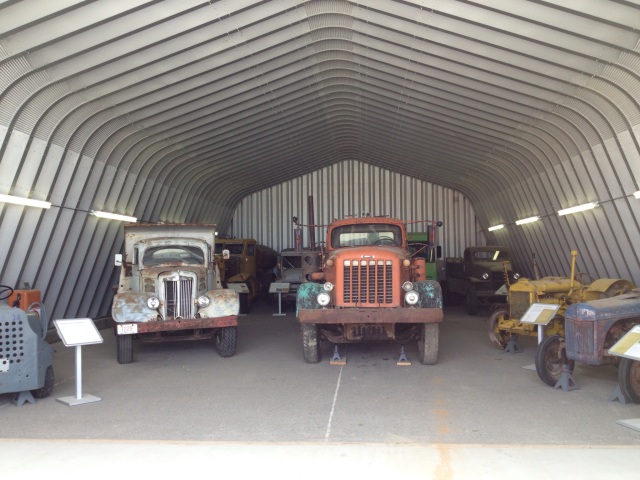 They had a garage full of unrestored wrecks that had some local significance back when this was a hub for building and operating the Alcan. 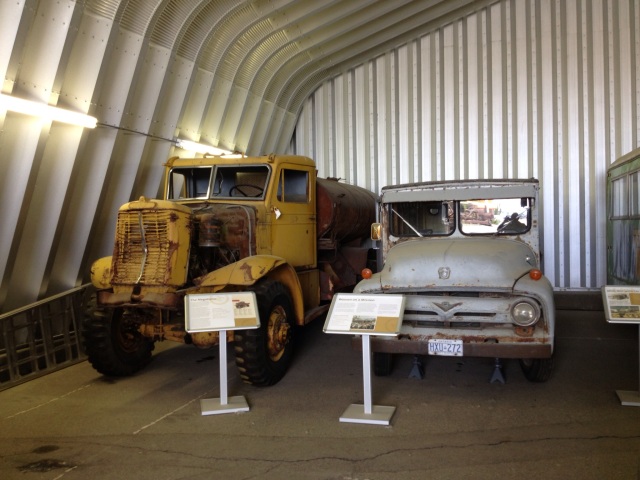 Lots of great old…well, junk I guess. But each with an interesting story. 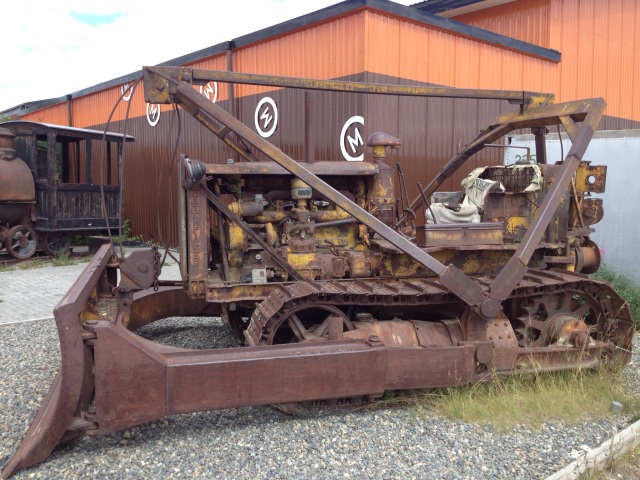 I think I saw this bulldozer building an airstrip in “The Sands Of Iwo Jima”. 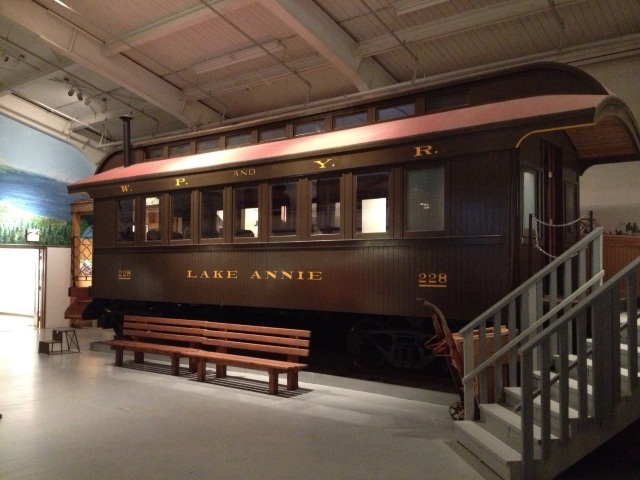 Inside they had much more, most of it restored, like this rail car from the old White Pass and Yukon Route Railroad. 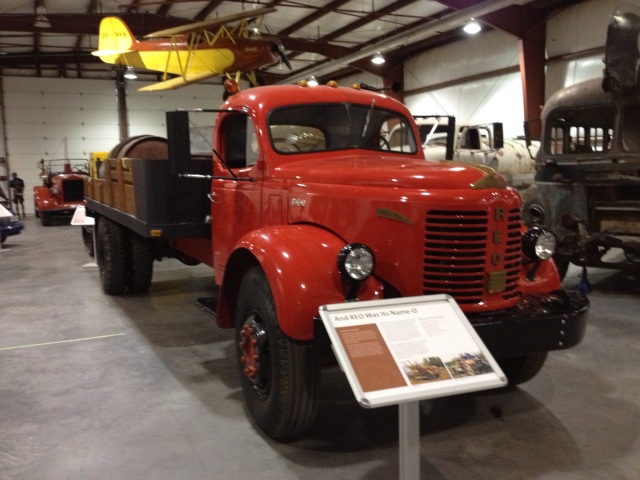 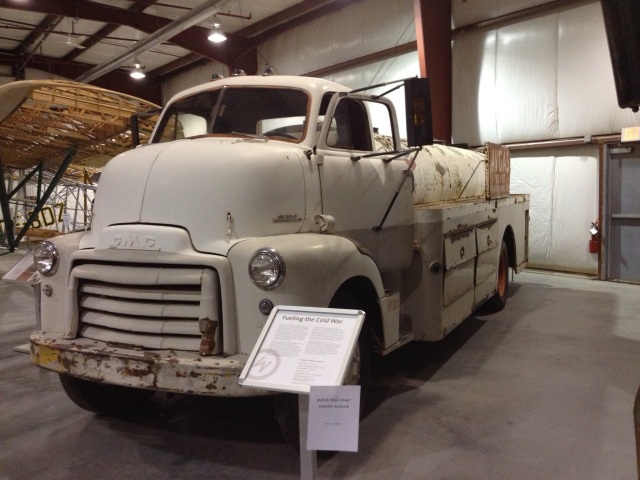 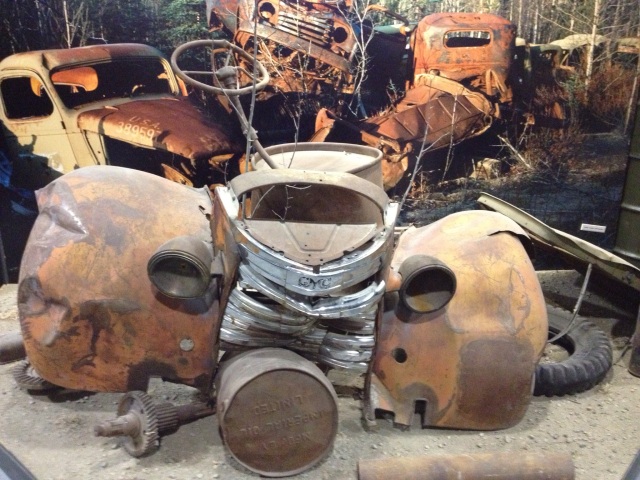 This, I believe, is called a “collage”. It represents what can still be found in the underbrush all along the old Alcan. As always, the US military found it more cost effective to just park worn out equipment and walk away when this part of the road was turned over to Canada.

There were a lot of interesting items in the building. 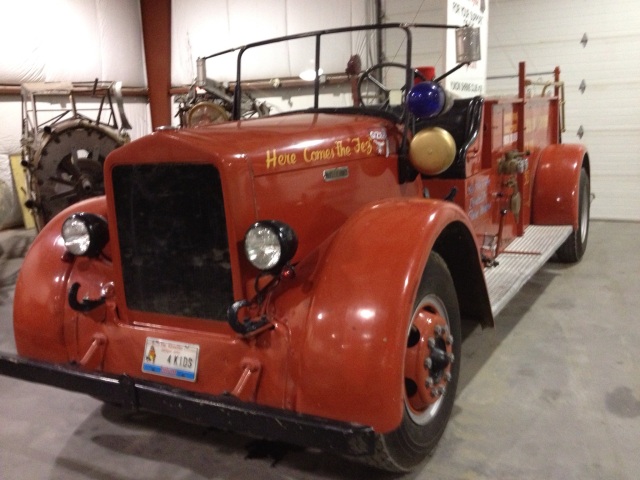 I’m unsure how this Shriner fire truck fits into the narrative, but here it is. 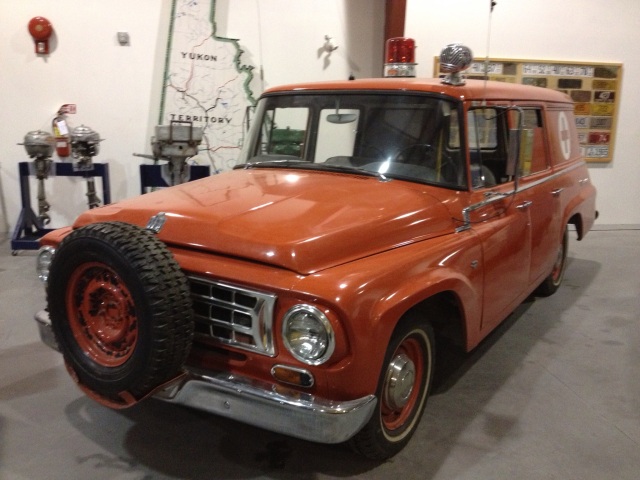 One of my all time favorite “wish that I owned one” vehicles was the International Travelall. What a great camper this 1965 ambulance would have made. I was born just a bit too late. 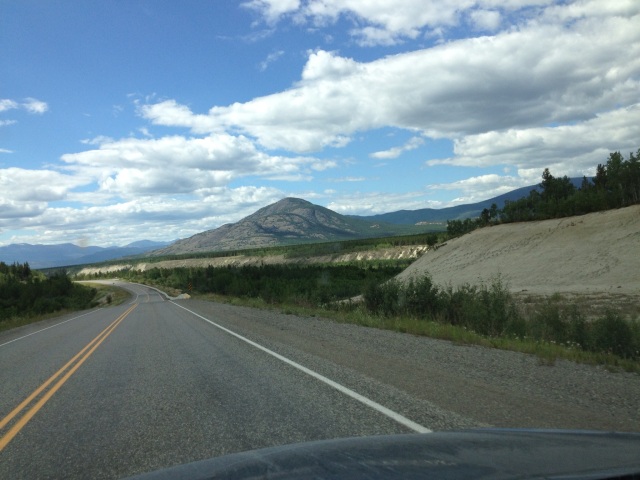 After leaving the museum, we headed off down the endless highway to Haines Junction, still in the Yukon, but incrementally closer to our destination.