We spent a total of seven days aboard the Panda Bear, mostly exploring Chesapeake Bay. Starting at Crisfield MD, we then visited Solomons Island and St. Michaels, both small towns popular with boaters.

At Solomons Island we got to see a surprisingly cool small museum dedicated to the Calvert Cliffs, a local phenomenon just packed with layers of fossils. Lots of boats and fossils and dioramas of the ebb and flow of the ancient sea beds. Very well done for such a small place. You could even watch someone using a fine brush to coax a new fossil (oxymoron?) out of a lump of sediment.

The museum at St. Michaels was similar with the emphasis on the building and preservation of old boats rather than fossils. Both museums were excellent and worth the <$10 price of admission.

Also, each museum had on the property one of only 3 screw-pile lighthouses preserved on land. There used to be almost 90 of these iconic structures in the bay and they are quite interesting.

The keeper, his assistant and the keeper’s family would live in the lighthouse. It looked kind of cozy, displayed on land on a warm June day. But you could see how it might become pretty hellish being pounded with waves miles at sea in a January storm. And no wifi.

I have now apparently seen all three of the land-bound screw-pile lighthouses, having visited the one in Baltimore with Richard last year and now these two. I should put that on a list so I can make a big deal about checking them off, now that climbing all of the 4,000 foot mountains of NH is permanently out of range. 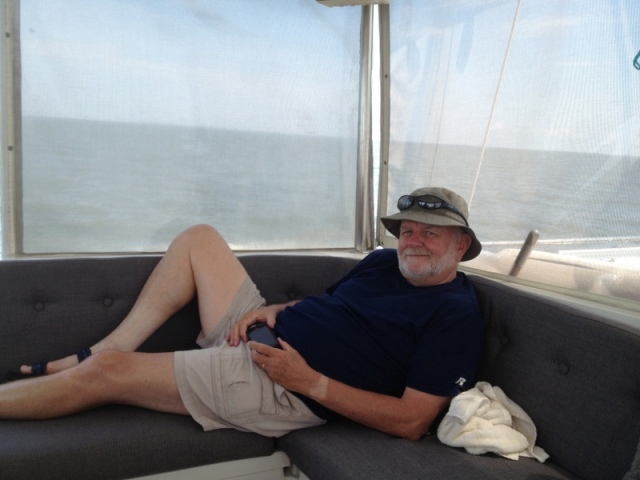 It was very hot and muggy when the boat wasn’t underway but I tried to bear up under the strain.

Local "watermen" operate an oyster dredge next to where we are anchored in the creek behind St. Michaels. Because of the excessive heat, they dredge early (and noisily) all up and down the creek and as close to our boat as they can. Captain Larry says having "Boston, MA" painted on our stern may be a disadvantage here.

At Crisfield and Solomons Island we tied up into a slip, but at St. Michaels we just anchored in a sheltered waterway behind the town.

Anchoring meant that we had to use the crane to move the dinghy from the top of the cabin to the water, two passengers would then clamber aboard and then Larry would row the 15 minutes to the town dock where we would climb up onto the embankment and walk two blocks to downtown.

The towns were nice and the people friendly but my favorite times were when we were underway. A cool breeze forward as you watched the boats and the land go by.

One thing: Chesapeake Bay is friggin’ huge. At an economical 6 knots, it took hours to get anywhere so there was plenty of time to kick back. 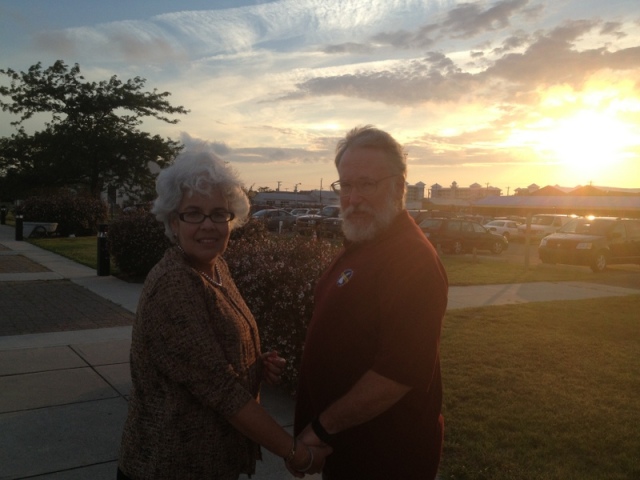 Flora and Captain Larry were the most gracious of hosts. Flora saw to it that we lived well on board. They have been together for almost 40 years and have spent most of the last decade traveling or living on their boat. 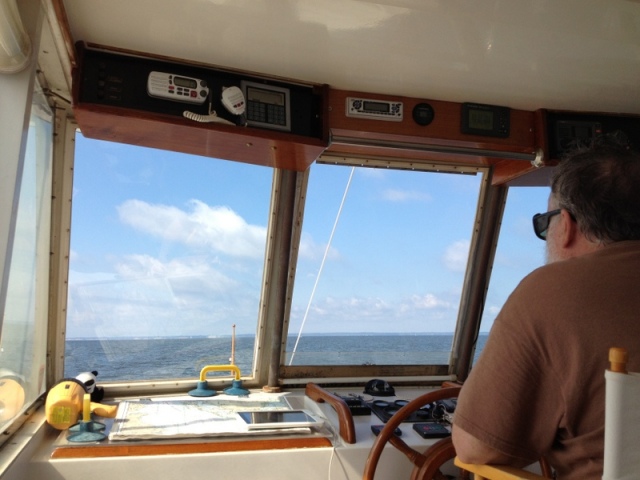 Larry is one of those guys who seems most at home when he’s at the helm. By now, he knows most of the east coast by heart. He navigates with his iPad constantly in his hands, following his Nav apps. It’s a brave new world.

(Picture from web)
One of the coolest things we saw (if you know me) was the hulk of the USAS American Mariner, a WWII Liberty Ship converted in the 50s to be a missile tracking ship. About 1967, she was stripped, towed to a sand bar in the Chesapeake and sunk in 20 feet of water for use as a target for the next 40 years. She looks just like she is floating. 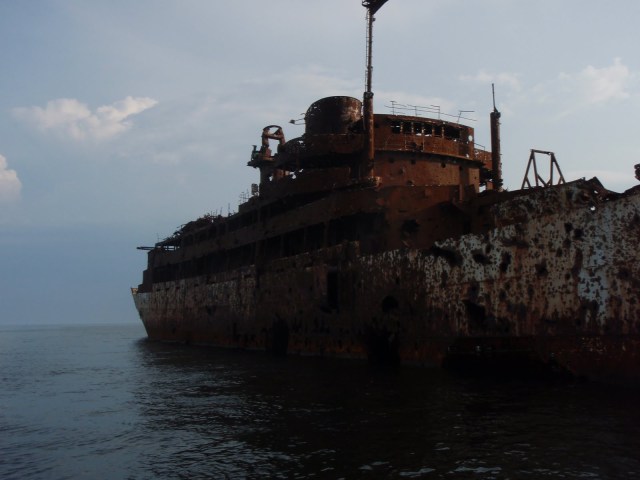 (Picture from web)
Until you get a bit closer and see that she is just shot to shit. There seems to be no visible undamaged area left. Plans are to leave the hulk until it rusts away of it’s own accord. Unfortunately,she’s in a restricted area (imagine the ordinance laying around, both aboard and in the adjacent waters) and we couldn’t get close enough to take our own pictures with the iPhones. 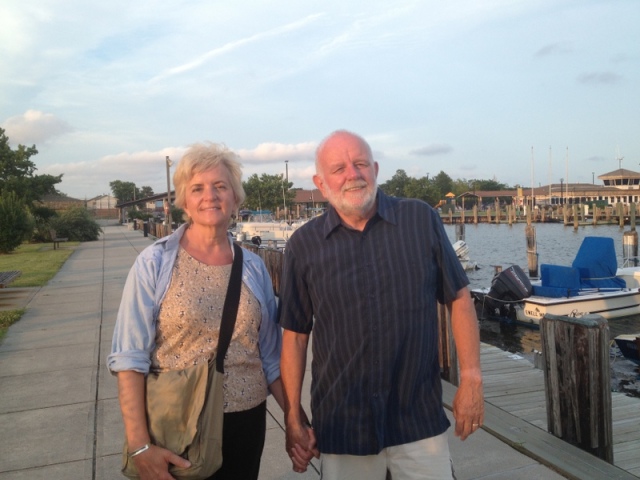 A super week. We had lots of fun with two great friends.

But now it’s time to get in the Solara and make that long 497 mile drive home.