The Trial of Whitey Bulger 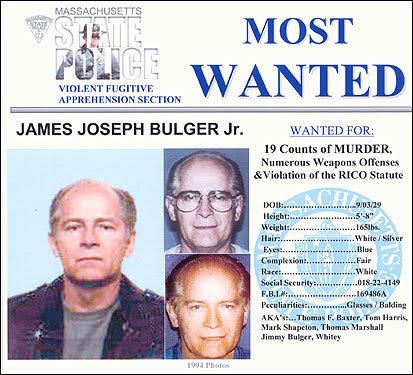 Just a note to followers of the Whitey Bulger trial (like me) that the best source for intelligent, experienced commentary on the ongoing trial can be had at The Trial of Whitey Bulger, a great blog written by a retired Asst. District Attorney of 25 years who is intimately familiar with all the players on both sides of the case and a daily attendee at the trial.

About the Author from the blog:

The author of this blog lived in the same neighborhood as Whitey Bulger as Whitey was beginning his criminal career. He is a former Marine officer and a criminal trial attorney. He began as a defense attorney in a small Boston law firm that had as clients the top Boston Mafia figures. He represented a defendant in the first wiretap case tried in Massachusetts. He defended other in in major felonies. He also represented the Boston School Committee in the famous school busing case.

He left the firm to become a prosecutor where he rose to the top position his office. He has tried every type felony from murder on down. He specialized in electronic investigations and as well as arson prosecutions. He has conducted and overseen more undercover electronic surveillance than all others prosecutors in the Commonwealth combined during his career. One target of his surveillance was Whitey Bulger’s criminal network.

To those in the know ( I so smugly assert), the real "inside dope" on the trial is available from Matt Connolly’s live blogging of The Trial of Whitey Bulger.